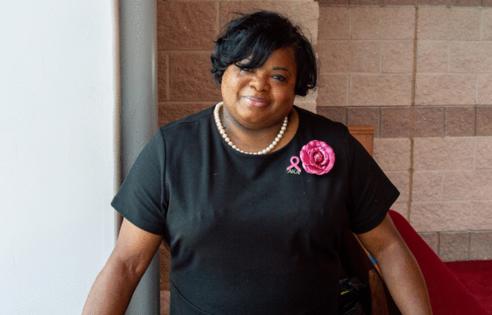 She’d been shocked to learn the area had one of the nation’s worst rates of breast cancer, particularly among Black women. On a shoestring budget, the 54-year-old human resources manager began helping peers who often felt shunned by the health care system.

It wasn’t long before cancer struck someone she knew. At the outset of her work to encourage mammograms, she and her sister were screened. It turned out her sister had an aggressive breast cancer at a late stage. She ultimately survived through a double mastectomy and intense radiation treatment that left third-degree burns.

Her sister’s experience further galvanized Weaver’s passion for breast cancer education. And recently, she was one of many local women who shared their stories for new research by Susan G. Komen, a national breast cancer nonprofit.

In much of Hampton Roads, a recent analysis by the organization found, Black women are no more likely to be diagnosed with breast cancer, but are more likely to die from it. When diagnosed, it’s often at a later stage and the disease has taken hold, like with Weaver’s sister.

The rates of breast cancer in the region overall are higher than state and national averages. But the gaps across racial lines are even worse. Suffolk and Chesapeake had the highest discrepancies between Black and white women.

The data suggests, the report’s authors wrote, that breast health inequities in the region could be explained by economic vulnerability driven by institutionalized racism and disparities in access and quality of care.

Before the new analysis, Komen looked through national data to find the 10 metropolitan areas in the U.S. where the most Black women were dying from breast cancer. That included Tidewater.

Then they hired a public health research firm to dive deeper. What they found here: “striking segregation” across the region, contributing to barriers in accessing care and compounding historic racism in the medical system.

Breast cancer here “is largely influenced by two factors,” authors wrote: “where a person lives and their race.”

In Suffolk, for example, the mortality rate among white women is about 16.2 per 100,000 people. For Black women, it’s 42.8, meaning nearly three times as many die from the disease. In Chesapeake, roughly 33.7 Black women per 100,000 are dying, compared with 18.9 for their white counterparts.

Johnson said the issue of breast cancer disparities in the Black community is a longstanding one. Komen’s recent goal was to seek answers about why, in the communities hid hardest.

“We also began to look through the lens of historic racism as a structural barrier to actually propagate these disparities in the Black community,” she said.

The team supplemented the data with interviews and focus groups with people in the local health care field, community health workers and women, some of whom have survived breast cancer and others who’ve never been diagnosed, including Weaver.

“If I know (I have cancer), I can’t deal with it,” one Norfolk breast cancer survivor told the group, describing how Black women can feel about the issue. “If I don’t know, what am I going to do about it? … Breast cancer is like a death sentence and especially to the African American.”

Fear of the unknown was a through line from the women interviewed, Johnson said. People are often scared to get a mammogram, unsure of what the experience entails, and even more afraid of having to deal with a potential diagnosis.

But screening rates alone don’t appear to be a problem. Black women were actually more or equally likely to get a mammogram, the data showed.

“The challenge is what happens after the mammogram,” Johnson said.

If something suspicious is found, but women don’t have the financial or knowledge resources to seek out proper care, screenings aren’t as helpful. Or, they may get screened later in life once cancer has progressed, leading to a greater chance of dying from it.

Working with women at her Portsmouth church often drove home to Weaver just how unequal health care can be.

Sure, there were pamphlets offering free mammograms, but they used terminology people in low-income areas didn’t always understand, she said. Or they apparently went to wealthier ZIP codes, leaving behind the women actually dying from the disease.

One time, Weaver set up free mammograms for women at a local hospital only for them to return utterly dejected, she said. They felt like they were looked down upon by the mostly-white health staff for not knowing exactly what was about to happen, or for taking advantage of the free screening.

“It was kind of a terrifying situation because they felt like they weren’t wanted there,” said Weaver, who works at the Portsmouth Health Department. “Many women came back after going there and didn’t want to go back.”

Historic bias in the medical system is among the challenges Sentara Healthcare is trying to combat, along with other social factors that can impact health, said Iris Lundy, a nurse and Sentara’s director of health equity.

The disparities in Suffolk and Chesapeake already were on Sentara’s radar earlier this year when leaders were looking at which cancer to home in on, Lundy said. The health system’s data matched what came out recently in the Komen report, she added.

Lundy said Sentara is working to supplement traditional measures, such as its mobile mammography van, with more targeted efforts to reach underserved communities, including connecting with faith leaders, providing transportation for those who need it and building trust with patients.

“I think we have to move on from how uncomfortable something (like a mammogram) might feel and talk about the benefits of early detection, the benefits of talking about our medical history,” she said.

Discussing medical problems is often taboo in the African American community, added Lundy, who is Black. Family members find out a relative “died of some cancer that no one even knew about,” she said.

She hopes Sentara can educate people that “it’s OK to have these conversations and we encourage you to have them.”

It will take years for health outcomes to catch up with their efforts and be reflected in the data, she said, but in the short term she hopes to focus on reaching affected communities.

We “won’t be able to close the gap in a day, just like it didn’t expand in a day,” Lundy said.

In a joint statement to The Virginian-Pilot, leaders at Chesapeake Regional Healthcare, the Chesapeake Health District and the nonprofit Healthy Chesapeake said they’re aware that there are Black women in the region who are underserved. They said they’re working to use ongoing and new programs to help address inequities, including Women’s Wellness Wednesdays launched this summer in the South Norfolk neighborhood.

“As partners in public health, we look forward to continuing our work to improve breast cancer outcomes for women in the Black community,” they wrote in the statement.

In response to its findings, Komen is launching a health equity initiative called Stand For H.E.R. in each of the 10 areas it analyzed.

A major part will include hiring local staffers who can walk women through the health care process step by step. (Weaver said she herself pitched this idea, in light of the challenges she’d heard from Portsmouth women.)

Komen also is working on improving the quality of care for Black patients at specific clinical facilities — the organization declined to name them — which will be a multiyear process, Johnson said.

Other aspects of Stand For H.E.R. include workforce development to get more Black professionals in the breast cancer field, increasing access to genetic counseling and an emotional support hotline.

Several years ago, Weaver won a national award for her breast cancer work in Portsmouth. She said she’s hopeful to see Komen bring more resources to the issue than she can alone.

“There’s still a lot of work that needs to be done,” Weaver said.