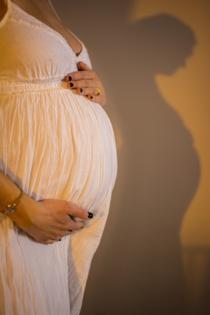 That’s because pregnant women are much less likely to be vaccinated. Only about 25% have gotten at least one dose of COVID-19 vaccine nationwide, compared to about 75% of all people age 18 and older, according to the Centers for Disease Control and Prevention.

At the same time, pregnant women who contract the coronavirus are more likely to get seriously sick and face a higher risk of delivering their baby before full term, according to the CDC. Intensive care units at Duke and UNC hospitals that would rarely see a pregnant woman are treating several with COVID-19, says Dr. Geeta Swamy, a professor of obstetrics and gynecology at the Duke University School of Medicine.

There are several reasons why pregnant women might be less likely to get vaccinated, Swamy said during a press briefing. For starters, they’re simply cautious about doing anything they think would harm their fetus or newborn child.

In addition, until recently the message about vaccination was less clear for pregnant women than the population as a whole. Because pregnant women were not enrolled in clinical trials for the vaccines, public health officials sent mixed messages about their safety that led to confusion, Swamy said.

Now, after months of use, including by many pregnant women, researchers have data to show that the vaccine works just as well in pregnant women and is just as safe. Last month, the CDC and other federal health officials issued their clearest guidance yet in support of vaccination for pregnant women.

“The best way to reduce your risk, to take care of yourself during pregnancy, is to get vaccinated,” U.S. Surgeon General Vivek Murthy said during a press conference last month. “That’s why we’re working hard to get that message out.”

But that message must compete with many other misconceptions shared on social media and among the public, Swamy said. There’s no evidence that the vaccine will cause infertility among men or women, for example, or interfere with a woman’s menstrual cycle. And the data shows that the vaccine would not make it harder to get pregnant or cause miscarriage, Swamy said.

What about long-term side effects?

Questions about the long-term effects of the COVID-19 vaccine are harder to answer, Swamy said.

“We go through the usual process of clinical trials, evaluation, FDA approval, CDC review and approval and so forth,” she continued. “So all the myths out there that people have raised about what the short-term and long-term effects may be are comparable to how we’ve looked at other vaccines, and there’s no real reason to raise more concerns about this one than any other.”

Early last month, UNC Health posted brief interviews with five expecting or new mothers who work for the health system about their decisions to get vaccinated. Among them was Dr. Erika Shah, an internist who was breastfeeding her 6-week-old daughter Sonia when she became eligible for the vaccine late last year.

“You think about all these things from an emotional standpoint,” Shah said. “But I’m a scientist, so I also thought about it quite logically. I knew how vaccines help stimulate our immune system and that we give vaccines in pregnancy and breastfeeding all the time. They’re safe.”

Shah said there were no changes to her milk supply after her shot and that her only side effects were a sore arm and some fatigue the following day. She recommends women not put off getting the vaccine because they’re pregnant or considering pregnancy.

“Because the sooner you’re protected, you’ll be protected through pregnancy, and we know that pregnant women are at higher risk for complications with COVID infection,” Shah said. “Thousands of women who are pregnant have been vaccinated, and there hasn’t been any evidence of safety risks.”

KANSAS CITY, Mo. — While most public schools in the Kansas City area require everyone to wear masks — to the relief of health officials and the consternation of some parents — several private schools are leaving ...Read More