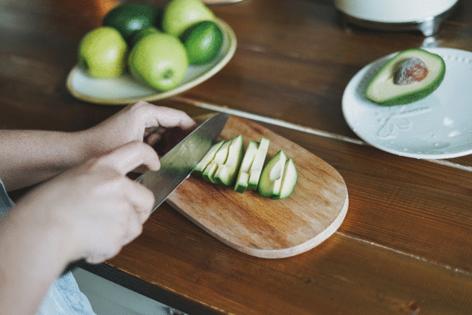 Please, do not confuse "School of Housewives" with "Housewives of Atlanta" "Beverly Hills" "New York City" or wherever else women bounce about, day drink and swipe long acrylic nails at one another.

The School of Housewives stands in Reykjavík, Iceland. Most who attend wear sweaters and Birkenstocks.

The school has been running since 1942. It was popular in the '50s and '60s with waiting lists but has struggled of late. According to the director, attendance correlates with the economy. When the economy is good, there is a downturn, and when the economy is bad, there is an influx as people are more interested in economizing.

Students learn how to cook, host, garden and put out kitchen fires.

Much of what they learn was a flashback to my junior high home economics class, a class in which my projects were often notated "needs improvement."

A teacher at the School of Housewives said students were not there to collect grades, but to collect wisdom, and know how to work with their hands.

If only my home ec teacher had embraced that attitude. I eventually self-educated through trial and error, watching early Martha Stewart and phoning my mother.

Some of the things these students learn are basics I have been doing for years. I was thinking I might go to the school. You should, too. We all should. It would be nice to be validated as actually knowing a thing or two. We might even get advance placement status.

A couple of the male students have great praise for the school. One said it reinforced who he is as a conservationist, learning how to make better use of one's things and using things as long as you can. Students learn how to knit, crochet, sew clothes, reattach buttons and mend holes.

When they're not fixing something, they are cooking something. Detailed cuts with razor-sharp knives into pastry were works of art. I wanted to reach through the screen and sample one of everything. Well, at least until they started making blood sausage.

Then there was the sequence with the head of an animal. I purposefully drew a mental curtain, but I do recall as they tore it apart for cooking, they were instructed to discard the eyeball and rip out the cartilage in the ear.

Waste not, want not.

I was already at the point of wanting not.

Students also learn to weave. The click of the loom is soothing and watching a pattern come together is amazing.

Reflecting on their stay and all they had learned about keeping a home, one student tenderly said, "So much happens here. It's just a wonderful life." What a lovely thing to say of any home.

Of course, a few probably left "needing improvement." But as a one student mused upon entering the school, if she failed here, she could always go to YouTube.

I just learned a new way to tell if you are "officially old."

This tidbit comes courtesy of an 11-year-old granddaughter. She has no research to back this up, not a single poll nor shred of scientific evidence. That said,...Read More

They are less likely to see the doctor. They eat fewer fruits and vegetables. They're more likely to smoke, die in alcohol-related crashes, and engage in other activities that can lead to traumatic brain injury. By nearly ...Read More