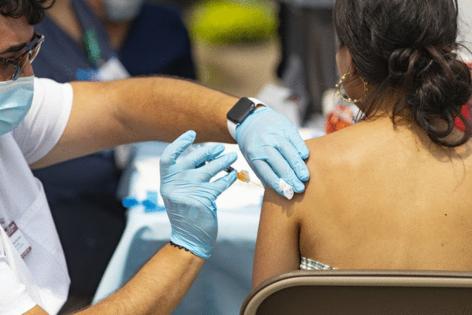 The National Institutes of Health announced this week that it awarded funding to five institutions to study whether the coronavirus vaccines are causing menstruation changes.

Medical experts say that abnormal periods following a COVID-19 vaccine are not a safety concern, a reason to skip out on getting vaccinated or a sign of infertility.

The studies plan to establish if there is a correlation between irregular menstruation and the Pfizer, Moderna or Johnson & Johnson vaccines, and if so, why the change is occurring, according to Dr. Diana Bianchi, director of Eunice Kennedy Shriver National Institute of Child Health and Human Development, a branch of the NIH funding the study.

While there has been no link established so far, Bianchi said that it is “biologically feasible” because of the way the shot generates an immune response in the body. She added that the scope of who may be experiencing abnormal menstruation following inoculation is not yet known.

The NIH-funded studies come after a survey centering on collecting anecdotal reports of people’s menstruation experiences following COVID-19 vaccinations garnered much attention on social media and among researchers. The survey, launched in April and led by Kathryn Clancy, an associate professor at the University of Illinois at Urbana-Champaign, and Katharine Lee, a postdoctoral research scholar at Washington University School of Medicine, has more than 150,000 respondents so far.

Clancy and Lee told the Tribune in April they created the survey because of their own experiences with abnormal menstruation after their inoculations. The survey is open to anyone over 18 who has received at least one dose of a COVID-19 vaccine and either has had or has menstrual cycles.

Clancy recently tweeted that they applied for the NIH grant but were not awarded funding.

Bianchi said the the NIH put out the special notice to fund clinical studies after seeing online reports of people reporting irregular menstruation as well as observing a “very clear cut gap” in evidence.

Despite reports earlier this month that the Centers for Disease Control and Prevention had begun research into abnormal menstruation following vaccination, the institution is not conducting further research into the 1,589 incidents of “menstrual irregularity” that have been logged into its reporting system, according to Martha Sharan, a public affairs officer for the CDC’s Vaccine Task Force.

“At this time, CDC is not seeing any safety concerns that warrant additional surveillance of irregular menstrual symptoms reported to the Vaccine Adverse Event Reporting System,” Sharan said in an email to the Tribune.

Sharan said the reports, recorded through the end of July, amount to “a very small number,” considering the more than 300 million doses of COVID-19 vaccines that have been administered.

Bianchi said that although the CDC numbers are low, the actual number of people experiencing abnormal periods after a vaccine shot may be much higher, because the system relies on people voluntarily responding to it.

“I would bet that most people don’t even know about it,” Bianchi said.

The reports made to the CDC system are in line with the symptoms that have been discussed more widely online.

“I was due for my menstruation cycle but when it came, I began to bleed heavily. This is not a norm for me — my periods are usually light with spotting at the beginning of my cycle,” one COVID-19 vaccine recipient reported to the CDC system. “It was so heavy when it began on Friday that I bled through my pants.”

“I am in through menopause and have not had menstruation for 18 months. Within 72 hours of the vaccine I had light menstruation that lasted for 24 hours,” another person reported.

The NIH-funded studies will be prospective, Bianchi said. They will include a control group and monitor potential menstruation changes in people who have not been vaccinated yet after they receive a COVID-19 vaccine. One issue with the existing information surrounding COVID-19 vaccines and irregular periods is that all of it has been retrospective, she said.

The lack of information available about the potential period changes prior to when vaccinations began to be administered to the general public contributed to a fear that “didn’t need to be there,” said Nicole Woitowich, a research assistant professor at Northwestern University’s Feinberg School of Medicine, who added that it also led to a “gap of mistrust.”

“I think what really troubled people was that they were totally taken by surprise because they weren’t warned that they would have the most painful period of their lifetime, for example,” Bianchi said.

Bianchi and Woitowich said the lack of information has also fed into fears surrounding infertility. The COVID-19 vaccine has been proven to be safe for pregnant people, according to the CDC. Earlier this month the CDC urged pregnant people to get vaccinated.

The combination of these factors has likely led to increased vaccine hesitancy, Woitowich said.

“The myth compounded with the misinformation surrounding infertility, I think that’s a double whammy and really may prevent some people from getting vaccinated,” she said.

Bianchi said that the reason there likely wasn’t a study of the vaccine’s effect on menstruation during the initial trials last fall was because it was an emergency situation in which they were only looking for major complications. But she added, “it really wouldn’t be that hard to add a few questions specifically focusing on women’s health.”

For Woitowich, the lack of consideration of health issues that pertain to women and people who menstruate in the vaccine trials was likely also due to the historically male-dominated culture of biomedical research.

“Perhaps people think that just women’s menstrual cycles are not a big concern,” Woitowich said. These issues are exacerbated when it comes to people who are gender-nonconforming, she added.

In the comments of the Twitter thread in February that set Clancy and Lee’s survey in motion, some of the people who were discussing their experiences with abnormal periods identified as transgender or nonbinary.

“People who are of gender minorities have their own social determinants of health that are again not being considered when we’re not taking gender into account as a variable in research studies,” Woitowich said. “So we’re harming those individuals by not accurately considering the influence of gender on health and disease.”

KANSAS CITY, Mo. — While most public schools in the Kansas City area require everyone to wear masks — to the relief of health officials and the consternation of some parents — several private schools are leaving ...Read More

Many mornings I check CDC pandemic stats for my state and county to weigh the facts against the hysteria. Then I check the headlines to see what blew up overnight and to see what is still standing.

We live in turbulent ...Read More

PHILADELPHIA — Meet Thelma Nesbitt, a water safety instructor with Philadelphia's Parks and Recreation Department by day and a nursing home nurse by night.

COLUMBUS, Ohio – Mikey Heine wasn't going to be able to keep attending Bridgeway Academy in Columbus, Ohio, a school that has helped him grow and develop his own sense of self.

"We were looking at withdrawing Mikey from...Read More

Is your child OK?

It's a question parents, guardians and loved ones who care for their kids ask themselves every day. But sometimes it's hard to tell when children are in emotional distress.