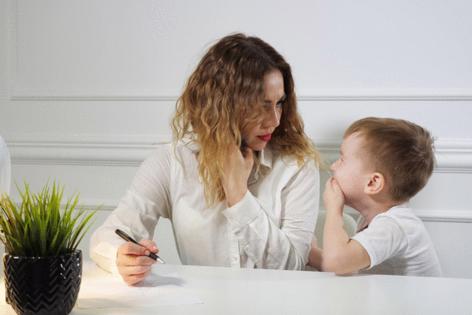 Q: My just-turned-4-year-old repeats things he has heard or has said before. For example, even though my brother’s family moved away nearly two years ago, whenever we drive by their old house he will say, “There’s Uncle Frank’s house!” He also asks questions when he knows the answers. For example, if I’m wearing a green dress, and even though he knows his colors, he will ask, "Is your dress green, Mommy?” Lately, when he asks a question of this sort, I ask him, “What do you think?” I want him to answer his own question, but he immediately becomes quiet. He’s obviously bright, but I’m beginning to think there may be something wrong. In any case, this habit of his has become very irritating. What do you think?

A: I think you’re making a mountain out of a molehill. If there is a problem, it would fall into one of three “D” categories: discipline, development or disorder. You’re certainly not describing a discipline problem. Furthermore, my rather extensive experience as a parent, grandparent and family psychologist tells me what you’re describing is no big deal.

I know it takes a lot of patience to respond with more than “Uh-huh” to your son’s repetitious statements and seemingly unnecessary questions, but in this case, patience will pay off handsomely for both of you. Take the time to teach him what conversation is all about by responding to these “annoyances” with a question that causes him to think and draws him into a discussion.

For example, the next time he says, “There’s Uncle Bob’s house!,” you can ask, “Do you remember where Uncle Bob lives now?”

If he asks, “Is your dress green, Mommy?” you can respond with “Can you name another green thing?”

Helping your son with give-and-take conversation will quicken his overall language skills. In turn, you will begin to enjoy talking with him. Perhaps best of all, he will irritate you no longer.

Q: I have two boys, 18 and 33 months. How much time each day should I spend involved in activities with them? Also, they chase one another around the house among other sorts of roughhousing, but they hardly ever play with ...Read More

I finally tracked down the fellow who invented the so-called “pull-up.” His name is Lucapher (Big Lou) Saytan. Reputedly, Mr. Saytan lives in an underground bunker from which he develops and markets various nefarious ...Read More

Q: I am a principal at a private church-affiliated school. Contrary to my graduate school training and most of my peers’ practice, I believe disciplinary actions should fit the crime. As such, I do not generally issue ...Read More

One of the characteristics of a truly civilized society is the ubiquitous use of proper social courtesies. Raising a child is all about civilizing the savage within; therefore, “manners,” as they are known, should be ...Read More

Well, I must say I’m rather, uh, disappointed albeit my worst suspicions have been verified. I expected response to my recent column on the practice of high-fiving children, but I failed to account for the general ...Read More

Q: My husband and I recently visited our son’s family. We live 2,000 miles apart and with the pandemic and all, we hadn’t seen one another in several years. We were appalled to discover that they — our daughter-in-...Read More