Forget it or force it 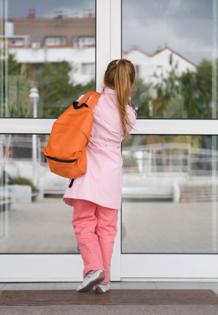 Q: I recently changed my almost 4-year-old son’s preschool. My son, once fearless, has become reluctant to simply get out of the car in the morning and go into the school. There’s always a teacher at curbside, welcoming the kids. At his old school, he’d just get out of the car and go in. Now, I have to walk him in, then he doesn’t want me to leave. Once I go, however, he’s fine. Did I make a mistake changing his school?

A: Unfortunately, today’s all-too-typical mother tends toward feeling that if her child has a negative reaction to a decision she has made, the decision was probably wrong and may well cause psychological problems. This is tantamount to believing that a child’s emotional reactions are accurate barometers of parental decisions.

A child is not in any position to know what is in his best interest. He may know when he is thirsty, but he does not know whether he should have water or a soda. If you give him water and he cries for soda, this does not mean you have done the wrong thing, much less that he will develop psychological issues concerning water. In this case, your son may know that he is anxious, but he does not know that the solution to his anxiety is for him to simply get out of the car and walk inside.

As you have already discovered, you cannot talk your son into opening the car door and walking in on his own. No anxious child has ever been talked out of his anxieties. Older children can be talked (sometimes) into doing what is necessary to test their anxieties against reality and therefore overcoming them (e.g., riding a horse), but when it comes to the anxieties of a young child, there are but two paths for parents to take: forget it or force it.

Forgetting it means deciding that the issue isn’t really that important (e.g., riding a horse) and that it is in the best interest of all concerned to wait until the child is older before re-introducing the child to the anxiety-arousing event or thing. When the issue is important (e.g., getting out of the car and walking into school), then forcing the issue becomes a necessity. Here’s a fact: When parents cater to a child’s anxieties, they worsen.

So, first, redefine the problem. This amounts to verbal sleight-of-hand that allows a parent to force a change in behavior without putting on the role of serious disciplinarian. Tell your son you’ve spoken to his doctor about the problem and the doctor says reluctance to get out of the car in the morning means your son is not getting enough sleep. So, if he doesn’t simply get out of the car at your first prompt (i.e., if he hesitates, requiring you to tell him twice), you’ve been instructed to make sure he gets more sleep that night by putting him to bed immediately after supper. Remind your son that you have to do what the doctor says.

If, the next day, when you pull up to the school, he does not seem to want to get out of the car, you simply say, “Oh, you’re tired. C’mon. I’ll walk you in.” Make no big deal of it but put him to bed after supper that evening. Not one of the many parents to whom I have recommended this approach have never told me it failed. Furthermore, I have never spoken to a pediatrician who disapproved of his authority being invoked in this creative manner. In fact, most of ‘em think it’s funny.

A 4-year-old – I’ll call him Popeye – had a habit of hitting other children in his preschool program. His teachers tried various approaches, including rewarding him with a treat on days when he didn’t hit. That ...Read More