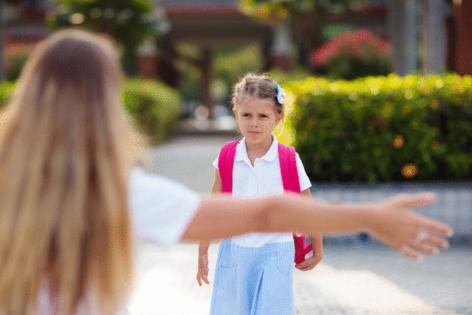 Q. My ex left me about a year and a half ago. I lost my job and that was it. We share our 6-year-old daughter equally. My ex now lives with a new guy. He came with her to the last exchange. I told him not to come again and it blew up. I was yelling, my ex was yelling, and so was he. My daughter was crying. It was a mess. I don’t know why he has to come to the exchanges. What’s good ex-etiquette?

A. Truth is, he doesn’t have to go to the exchanges, and if your ex knew it was going to upset you, surprising you by bringing him along was hitting below the belt. I don’t know the history behind the breakup, but it sounds like it hasn’t been long, and that’s when emotions run the highest.

I’m going to offer a little different take on interacting with an ex’s new partner. Granted, I have seen court orders suggesting the new partner not accompany the parent on the exchange to prevent fights. But if you have broken up with your child’s parent, chances are both you and she will find someone new. It’s going to happen, so to be angry that the new guy shows up at exchanges seems like a waste of time.

Your ex’s new partner lives with your child. This is a hard fact to swallow if he was the reason behind the breakup, but it’s still a fact. The courts will still require your child to go back and forth between homes. Based on that, I would want to meet the guy who lives with my child for half of her life. I’d also want him to meet me, understand why I have the rules I have at my home and hopefully learn to work together in the best interest of the child that lives with both of us.

Sound impossible? It is if you stay stuck in your old relationship with your ex. That’s when you spend all your time thinking about what she did, how you hate her and how you will pay her back. And if she is also in that frame of mind, you will be in a vicious cycle of paybacks and manipulation.

Think about it like this: Every payback to your ex is a payback to your child. You can’t separate their DNA. When your child sees either parent treating their parent poorly or being openly manipulative, they feel it in their heart. Studies show ongoing conflict after a breakup actually affects your child’s brain development. Mark my words, if you keep this up, sooner or later your daughter will suffer with anxiety and not want to visit — and it will not be because she doesn’t want to see you. She will simply be looking for a way to not witness the two people she loves the most yelling at each other.

I’m not saying, “Just smile and be pals.” Breakups hurt and they are difficult to get over, but there has to be a better way than fighting in front of your child. You may have to keep things separate until emotions calm. Have a discussion prior to the next exchange and make an agreement about how exchanges will be handled from this point on. Try adjusting the pickup and drop-off to “to school, from school” so you don’t see each other for a while. Just don’t look for ways to keep the kettle boiling. Find ways to reduce the heat. That’s good ex-etiquette.

Dear Mr. Dad: A few years ago, a friend sent me a column of yours that dealt with the issue of gender identity and sexual orientation and pronouns. I didn’t pay much attention to it then, but everyone at my office is now...Read More

Q. My children’s father has a very bad temper. Over the years my kids have asked me, “Don’t to tell Dad,” for fear he would get angry. I have kept a few minor things in confidence, but now my 15-year-old daughter ...Read More

Q. After three years together, my ex and I broke up four months ago. I was so mad that I didn’t take anything except my car, which was mine before I moved in. He still lives in the house, has my sofa and has all my pots ...Read More

Q. I had a miserable 10 years with my ex. We tried counseling, but my ex stopped it when things got too close for comfort. I am convinced she is a narcissist. She checks all the boxes. Would this be enough of a reason to ...Read More