Here's How: Use Permanent Window Film to Block Heat 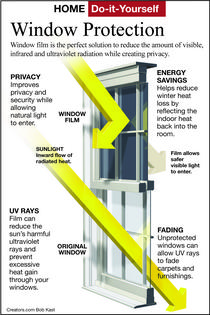 Dear James: The old-tinted film on my windows blocks heat, but the corners are becoming loose and cracking. How do I remove the old film and install new film myself? -- Lana T.

Dear Lana: Old, deteriorating, tinted window film is still effective at blocking heat and glare, but it can look really bad and impair your view outdoors. Newer window films have much less tint. They use a technology similar to low-emissivity replacement windows to block the heat during summer and save heat during winter.

Removing the old deteriorating window film is the most difficult part of this project. Never try to install new window film directly over old film. The key to an effective removal of old window film is to soften the adhesive so the film and adhesive can be peeled and gently scraped off the window glass.

Several of the major do-it-yourself window film companies offer liquid solutions for removing old film. First, try using a mild solution of vinegar and water. Saturate the window film with it and then tape plastic film over the windowpane to keep it moist and warm. Within several hours, the old adhesive should be soft. If this does not work, order some of the special removal solution.

Once the old window film and adhesive are removed, go shopping for your new window film. For good year-round performance, a lightly tinted, low-emissivity type of window film is best. It will block the sun's heat during summer and help reduce indoor heat loss during winter. If glare is your primary concern, select a window film with a darker tint.

Now that you have your new window film, thoroughly clean the window surface and the frame. Cleaning the frame keeps dirt particles from falling on the glass and film while it is being installed. Once dirt gets embedded in the adhesive on the film, forget ever getting it out completely. Just a few dirt particles, though, are difficult to avoid and are not very noticeable.

The ideal temperature range to install window film is between 45 and 90 degrees. The temperature of the glass surface can vary significantly from the indoor air temperature inside your house. Also, select an installation time of the day when the sun will not shine directly on the window glass.

Spray the window with film application solution or a weak solution of detergent and water. Wipe it down with a squeegee. Wet the window again and scrape it with a razor blade in a holder. Finally wipe it dry with a lint-free cloth.

Measure the size of the window glass surface, and cut a piece of the window film slightly larger than the glass. Then, spray the window surface with more solution until is thoroughly damp and runs down. Carefully pull the backing from the window so it does not get creased.

While the glass is still very wet, spray a light mist of solution on the adhesive on the film. Place it against the wet window. Spray the exposed side of the film with more solution. This acts as a lubricant for the squeegee. Follow the recommended squeegee movement pattern to squeeze the water and bubbles out from beneath the film. Allow the film to dry thoroughly before touching.

Send your questions to Here's How, 6906 Royalgreen Dr., Cincinnati, OH 45244 or visit www.dulley.com. To find out more about James Dulley and read features by other Creators Syndicate writers and cartoonists, visit the Creators Syndicate website at www.creators.com.

Dear James: A tree fell and damaged some gutters, but I should replace them all. I plan to have the gutters professionally made, but I will install them myself. Do you have any advice? -- Greg R.

Dear Greg: You can ...Read More

Dear James: I enjoy gardening and landscaping. It would be convenient to have an attractive walkway through my flower gardens. What is a good option for a colorful DIY walkway? -- Amy T.

Dear James: The old deadbolts on my front and side doors are difficult to turn with a key or from indoors. What maintenance is needed, and can I do it myself? -- Mike L.

Dear Mike: For security reasons, it is important ...Read More

Dear James: Our window and door trim are looking dull, worn and scratched. They are beyond just refinishing. What are the steps to removing and replacing the old wood trim myself? -- Colleen W.

Dear Colleen: It is ...Read More

Dear James: We remodeled our kitchen, but we love our stained wood cabinets and some need new doors. How can we match the color and edge detail on the new doors with the old ones? -- Ted G.

Dear James: My old deck and patio have gotten worn and rough over the years. Instead of having expensive repairs done, are there comfortable, durable coverings I can put over them? -- Cheryl T.