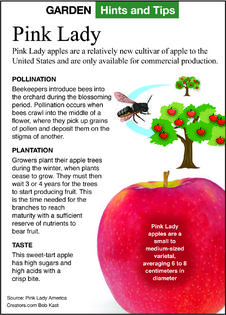 Q: I ate a Pink Lady apple and the seeds inside the core were sprouting roots. I planted a couple of them, and they are growing. Can I grow them and get Pink Lady apples in a few years?

A: The answer is yes and no. Most apple trees need two different kinds of apple tree pollen to get a cross-pollination that will grow an apple. Pink Lady apples may produce some apples if only Pink Lady apple trees are around but will produce better if other varieties are nearby. If another variety contributed the pollen for your apple seeds, then you have a hybrid and not a pure Pink Lady. Your seedlings are either 50% Pink Lady or 100% Pink Lady, so they are worth growing to see what you get. (Actually, they aren't Pink Lady apples -- see below.)

Let's go back to the beginning. Pink Lady is a hybrid between the Golden Delicious and Lady Williams varieties. This hybrid apple from 1973 is actually the variety called Cripps Pink. It is named after John Cripps who worked for the Western Australia Department of Agriculture. He crossed hundreds of apple varieties and grew the seeds until the over 100,000 trees matured and had fruit of their own. After thousands of taste tests, the tree that became Cripps Pink was selected.

John Cripps also crossed Red Delicious and Lady Williams apples to get the Cripps Red apple that is sold as the Sundowner apple. It is similar to the Pink Lady apple and can be substituted in baking and other recipes.

During the long maturation process the chemicals that keep the seeds dormant in the apple core slowly dissolve away. If you are eating these apples in the spring and summer, they could be coming from growers in Australia or South Africa. If they are coming from U.S. orchards they have been stored for many months in refrigerated warehouses, since they store well. The seeds have gone through a simulated winter dormancy and are ready to grow.

Plant the seeds in flower pots with potting soil. They will probably grow from a few inches to about a foot tall this summer. You can plant them outdoors in the fall, but the soil may dry out around the small root system. It will probably be better to place the pot in a large plastic bag and store it in the refrigerator until next spring. Planted outside in the spring the trees will grow larger root systems. It will take three to five years of good care to get the plants large enough to produce an apple. You will only get apples if you live in warm climates that can get over 200 days of growing season weather.

You will be growing Cripps Pink apple trees and maybe you will like the apples enough to call them Pink Ladies, but you will need a license to grow and market them as Pink Lady apples.

Q: I have several hydrangeas in my yard. When is the best time to prune them?

A: I am glad you asked as this is National Hydrangea Week. There are several species of hydrangeas, and it does make a difference as to when ...Read More

Q: I have a paving stone patio behind the house. Behind the patio is a man-made stone wall that you can sit on. Behind the wall is a flower bed that has an ash tree in it. And finally, behind the flower bed is a downhill ...Read More

Q: We went on vacation at the end of June and now our vegetable garden has been taken over by weeds. Is it too early to begin thinking about starting over and doing a fall garden?

A: If you are a northern gardener, the ...Read More

Q: We are discussing when to cut down our ornamental grasses. I want to see them last through the winter and let the birds eat any seeds. My husband wants to cut them down in the fall because he says it is easier then. The...Read More