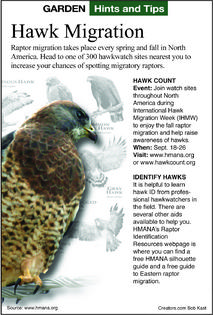 For gardeners in the northern two-thirds of the country, the fall is a time to clean up the leaves, plant a few bulbs and pack things up for the winter. Even in the south, the fall is a good time to reflect on how things looked over the summer and begin the planning process for next year.

For those of us who enjoy the great American hobbies of gardening and bird-watching, spring is obviously a big time, but autumn has a special treat in store for bird-watchers.

The migration of birds of prey can be a spectacular thing to watch. Raptors, as they are called, include falcons, hawks, eagles, vultures and a few other birds of prey like the fish-eating osprey, but do not include owls.

Most raptors migrate south from northern areas or down from higher-altitude nesting areas to find better sources of prey during fall and winter. While migrating, raptors use air currents, such as rising thermals and updrafts on wind-facing hills, to maintain their altitude. Even a pocket of warm air rising from a blacktop parking lot can help them stay aloft. Since thermals and updrafts from hills occur over land, many hawks do not readily fly over open water.

From an altitude of only a few hundred feet, their field of view is expanded to many miles. Once they reach as high as they can by circling within a thermal, they will fly in a steady direction to the next hill where they can get another updraft.

Because they depend on these wind currents, the birds may become clustered together in almost any locale. It's possible to see hundreds of these sometimes-rare birds circling in the same thermal. This spectacular view is called a kettle of hawks. The number of hawks in a kettle can be counted as they spin out of the top and begin their long downhill glide to the bottom of the next thermal.

As they travel along ocean and lake coastlines and mountain ridges, they sometimes come to locations that make them easy to see. Almost every area of the country has one of these hawk-watching points. Many times, an organization has been formed to protect the land in that area or to capture and band some of the birds so that we can find out where they go.

One of the oldest of these locations and organizations is at Hawk Mountain in Pennsylvania. The 2,400-acre refuge was established in 1934 and is now an international center for research on raptors. Hawk Mountain is within a three-hour drive of New York City and Washington, D.C. Check out their website at www.hawkmountain.org to get directions and to see how many hawks, eagles and falcons have been seen this fall.

On the West Coast, there is a bottleneck in the raptor highway along the coast at the Golden Gate. The southward migrating raptors are squeezed by San Francisco Bay on the east and the Pacific Ocean on the west. Thousands of individuals of up to 19 raptor species pass through the Marin Headlands each fall.

Some other good fall hawk-watching locations are Point Reyes in California, Cape May in New Jersey, Hawk Ridge in Duluth, Minnesota, the western shore of Lake Michigan, the Gulf of Mexico coast in Texas, and Point Pelee in Ontario, Canada, which extends into Lake Ontario across from Cleveland, Ohio. Each of these places is also a good place to watch many other birds and is among the top 10 places to watch birds in all of North America.

many lawns in our area suffered through. We had army worms. One day the grass was green and the next day it was dead-looking.

A: I tell people all the time that there are only three things that ...Read More

Q: Last week you answered a question about removing fungus from houseplant pots before bringing them in for the winter. My plants always seem to have whole armies of crickets, pill bugs, ants, earwigs or worms. How do I ...Read More

Question: Fall is coming, and I need to move my houseplants back indoors. I noticed that some have a fungal type of growth on the soil surface. Is this condition harmful?

Answer: There are several types of fungi and algae...Read More

Q: I have an old oak tree. During the recent cicada invasion, this tree took a mighty hit from those insects. Numerous small branches began to fall. I assumed they were falling because of the cicadas having made slits in ...Read More