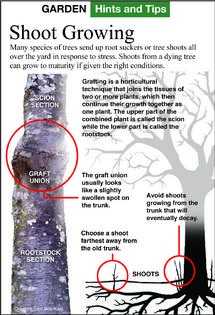 Q: I have an old oak tree. During the recent cicada invasion, this tree took a mighty hit from those insects. Numerous small branches began to fall. I assumed they were falling because of the cicadas having made slits in the branches to lay eggs.

Then, later, the tree began to literally dry up. The moss on part of its bark began to fade and dry. Some bark fell off. Leaves look wilted. I had no idea what was happening until I read about oak wilt in your article.

Could the injuries caused by the cicadas (like pruning during the growing season) have given entry to the fungus that causes oak wilt? Thank you so much for giving me some insight into what may be killing my tree. It is huge, towering over the two-story house and will have to be taken down by a crane if it doesn't recover. I pray it can. Is there any treatment for this disease?

A: The huge number of cicadas by themselves are a problem for trees, but on a large tree like yours they shouldn't be fatal. However, if they allowed oak wilt or another disease into the tree, there is a problem. You need to have a licensed arborist or someone from the extension service in your county take a look at the tree.

Q: I had a peach tree removed this spring that had been continually diseased. It had peach leaf curl disease and has also been eaten by Japanese beetles the past few years, so I had it removed. Now there is a "peach bush" sprouting from the stump. If I cut back all the suckers except for one, will it grow into a fruit-bearing peach tree, or should I just have the stump removed? If I let all of the suckers grow into a bush, will they bear fruit? I am thinking that maybe this tree really does want to survive, and I should give it another chance.

A: My main question would be: Was the original peach tree grafted or growing on its own roots? You may not know, but maybe you know the variety or where it was purchased and with some research it can be determined. If the trunk was cut off below the graft, the suckers that are coming up are from the rootstock and won't be the same kind of peach that was originally there. That may be good if the new shoots are more disease- or beetle- resistant or better tasting, but those things are all unlikely, or that peach variety is what would have been grown and sold before. If the tree was not grafted, then the new shoots are the same as the old tree. In either case, you can keep a shoot or two to find out what the new peaches look and taste like.

The best way to do that is to look at where the shoots are coming from. They can be coming from the sides of the remains of the trunk or directly from a root. As the trunk is going to decay away, a new large trunk growing from the sides of the rotting trunk will not be strongly attached to it in the future. It is a much better choice to keep a shoot that's coming up directly off a root. Look for a shoot from a root that is farthest away from the old trunk. If no shoots come from a root, pick the one farthest away from the trunk, with the strongest growth. Cut off all the rest to force the roots to send their energy to the one you keep. You can keep a couple this year to see which one starts growing best next year. You can leave a few if you want to try to keep them short to create a bush effect. In that case, keep branches that grow across through the middle cut off to allow sun and air circulation into the center. Also, you should do the peach leaf curl spray program starting this fall.

Q: A circle of mushrooms suddenly appeared in my lawn, which has never happened before. The mushrooms are about six inches tall and almost orange in color. How do I get rid of them, and are they harming the grass?

Q: Our new house has a few apple and pear trees. They are older trees, but they don't have a lot of fruit. How do we tell when they are ripe?

A: The first thing to know about apple trees is how many days it has been since...Read More

Q: I lost all twelve of my Leyland cypress trees to seiridium canker. I was told by an arborist that the disease spread via the ground, and that there wasn't anything I could have done to prevent it in the first place. He ...Read More