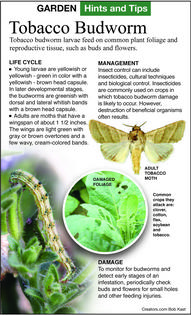 I also had this problem in New England and found that I had a midge (tiny flying insect you can't really see) that enters the newly forming bud. So, you suddenly don't see any blooms again after the first blush, but if you look closely you may see a dried or dead bud on the new branches. You have to spray for the insect or use a systemic insect repellent. I also tried blue cups staked next to the plant sprayed with cooking spray inside and out. This seems to work too, but the systemic stuff is better.

A: You are right. The rose midge is a tiny insect that most people will not even notice. The adult is a gnat, and the larva is a tiny grub only about a millimeter long. The life span during the summer is very short, only about two weeks. The female lays eggs on the side of the bud at the end of the branch, which is going to become the flower. The larvae eat the bud. There may be a dozen larvae in a single bud. They mostly drop out of the bud to pupate in the soil, but some may pupate in the bud. The last group in the fall remain dormant until the following spring.

Once the midges are in a flowerbed of roses, they won't leave until controls are used. A systemic insecticide applied early in the spring and continued for the whole summer is the best control. Looking at the ends of all rose branches and pruning out any infested branches should be done every few days. Any branches with black leaves at the end have already had the midges, which are now in the soil or are already adults. In the fall, the top few inches of mulch or soil should be removed and replaced.

Unlike the rose midge that seems to only infest roses, the tobacco budworm attacks many species of farm crops and ornamental flowers and vegetables. The adult is a one-inch-long moth that is active at night. It lays eggs on crops like alfalfa, cotton, soybean and tobacco. It damages chrysanthemums, gardenia, geranium, petunia, marigold, zinnias and many others. Cabbage, okra and tomatoes are also infested.

The caterpillar is mostly active at night. They prefer to eat flowers and flower buds, but they will eat leaves if there aren't any flowers to eat. They are striped yellow and brown with many tiny spines. There can be four or five generations per year in the South, but they are not cold hardy and don't survive Northern winters. They are found in Northern states every summer as the moth moves with the wind.

If the flowers are missing on your plants, inspect them at night to see if you can find the caterpillar. If you find them, just pick them off and kill them. There are a few natural parasites and wasps that attack the caterpillar, but if the infestation is heavy an insecticide with Bacillus thuringiensis will work. It is best to apply insecticides at dusk, when the caterpillars are more active.

Q: A circle of mushrooms suddenly appeared in my lawn, which has never happened before. The mushrooms are about six inches tall and almost orange in color. How do I get rid of them, and are they harming the grass?

Q: Our new house has a few apple and pear trees. They are older trees, but they don't have a lot of fruit. How do we tell when they are ripe?

A: The first thing to know about apple trees is how many days it has been since...Read More

Q: I lost all twelve of my Leyland cypress trees to seiridium canker. I was told by an arborist that the disease spread via the ground, and that there wasn't anything I could have done to prevent it in the first place. He ...Read More

Q: We have some bearded iris that have spread out from their original planted spot and now form a circle with an empty spot in the middle. Can we divide them and replant them back into the spot they came from? It is the ...Read More