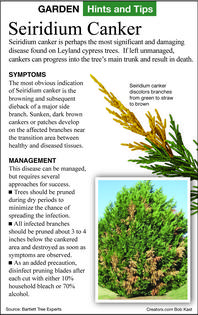 Some of the trees were higher than my two-story house, and I am still very upset over my loss. Over the years (the trees were about 15 years old when I had them removed), I pruned the trees with hand pruners and a lopper.

I never knew about sanitizing tools to prevent infection. I certainly do now! Do you think my lack of tool sanitation is what caused my trees to become infected?

A: This is such a sad tale of loss that might have been preventable. At the same time, I don't think you should blame yourself.

Leyland cypress trees are very common across the southern third of the country, as well as in the states on both coasts in hardiness zones six to eight. They are a hybrid between Monterey cypress and Nootka cypress. They are a lovely evergreen with dark green needles and a moderately fast growth rate: over three feet in a year. They grow around 20 feet wide by 60 to 80 feet tall. They are often kept much smaller by heavy pruning to form dense hedges.

Cypress trees of all species get several canker diseases that can kill the trees. These are fungal diseases that spread by spores during wet weather. They infect a plant where there is already damage from insects, hail or pruning. The first symptom is what we often call flagging. The dark green needles turn light green, then yellow and finally brown. The sooner the flagging branch is noticed, the sooner treatment can begin.

The canker is the point on the branch or trunk that marks the transition from live to dead tissue. Dead tissue will often be sunken and appear like a bruise. It will usually be oozing sap. The canker is the location that the fungus survives the winter. The branch needs to be pruned off several inches below the canker.

There are no chemical treatments for these canker diseases on cypress, although fungicide sprays just after wet weather may help. Keeping the trees healthy through proper planting, appropriate watering and spacing and not pruning them during wet weather will help prevent infections. The spores can spread when rain or irrigation water washes them down onto lower branches. Drought-stricken trees are more susceptible to the disease when the weather or irrigation wets the branches. The diseases are more common on trees that are heavily pruned into hedges. Prompt removal of heavily infected trees will help prevent the spread to other trees.

It is proper pruning practice to sterilize tools between trees. Rubbing alcohol or one part bleach to nine parts water can be used, but the bleach will damage tools if not rinsed off. Since hedge plantings are often treated as a single entity, sterilizing tools is often only done after the hedge is pruned. If a single flagging branch is being removed, sterilize the tool before cutting another branch on that tree or any other tree. I use a squirt bottle filled with rubbing alcohol to make coating the blades easier.

To answer your question. The disease is not spread via the ground. Cypress trees have been overplanted in many areas, and they are often not well maintained, giving the diseases a head start on infecting new trees. Even if you do everything correctly, many of your neighbors are probably not. Your trees became infected from other trees that were infected growing nearby.

Even though it is a tough loss, don't blame yourself.

Q: We have some bearded iris that have spread out from their original planted spot and now form a circle with an empty spot in the middle. Can we divide them and replant them back into the spot they came from? It is the ...Read More

Q: Back in the spring, we planted several 10- to 15-foot-tall trees around our new house. We tried to keep up with the watering, but the trees looked a bit wilted all summer long. Now that they are going dormant for the ...Read More

For gardeners in the northern two-thirds of the country, the fall is a time to clean up the leaves, plant a few bulbs and pack things up for the winter. Even in the south, the fall is a good time to reflect on how things ...Read More