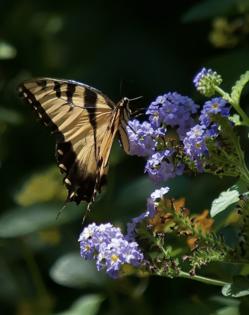 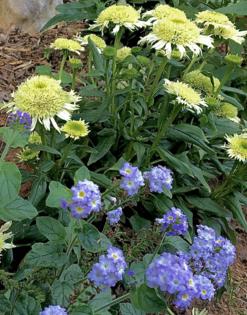 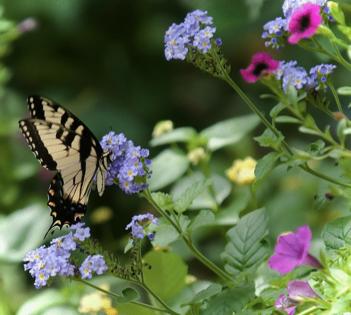 Augusta Lavender heliotrope made its debut in 2022, and after having it in my garden for 18 months, I am even more sold on the plant. Keep in mind I also wrote about it in summer 2021 and January 2022 and it continues to demonstrate award-winning traits.

This is an absolute must-have plant for the rare color offered the landscape, and of course, pollinators. The plant is really an anomaly to The Garden Guy for several reasons, and I’ll explain as I go.

According to the plant tag, it is cold-hardy in zones 9a and warmer. Not only have my plants persevered, I even had blooms for around 14 or 15 months. I have never been without Augusta Lavender plants since planting in April 2021.

This year I was able to give it more partners, which points out the second anomaly, the first being a remarkable longevity for a plant that was supposed to die. The reason I was able to create new partnerships is that my Augusta Lavender heliotrope patch has gotten larger with more plants.

This opened the door for partnerships with the new Double Coded Butter Pecan coneflowers and my favorite, which is a long sweep or drift in a pollinator garden with Heat it Up Yellow gaillardia, Rockin Blue Suede Shoes salvia and the new Meant to Bee Queen Nectarine and Royal Raspberry agastache.

While that was my favorite, I was also able to use some in mixed containers with Supertunias and Superbells calibrachoa. The use in containers really opens the door wide open for creative designer recipes, whether they be Proven Winners' or your own.

Until mid-June I was looking and feeling as though I were at Butchart Gardens in Victoria, Canada. Then in late June and July, The Garden Guy turned in to The Grouchy Garden Guy. Temperature turned into stifling triple digits, and rain was a rare event. It became a daily event of dragging the 100-foot hose with water wand or sprinkler. I felt as though I had created a monster.

The nonstop heat brought on spider mites to verbenas and whiteflies to my Augusta Lavender heliotrope. I cut the verbenas back much earlier and a little harder than usual. When I looked at the Augusta Lavender heliotrope, I despairingly told them, "I knew you were too good to be true." I kept the water regimen going, and then, in true miracle fashion, it rained almost every day in August.

Today the Augusta Lavender heliotrope plants are more numerous. They are lush and green with intensely colored blooms even though we have had a much earlier freeze than normal. Since I garden for pollinators and hummingbirds The Garden Guy just doesn’t use insecticides or miticides.

The third anomaly to me was the survivability after the onslaught of whiteflies. The Augusta Lavender is one tough, beautiful plant. Oh yes, the spider mite-laden Superbena verbenas survived too, demonstrating the effectiveness of cutting back and removal of infested material.

The Augusta Lavender needs plenty of sunlight to really perform. The soil needs to be well drained but doesn’t have to be luxuriously organic rich by any means. The plants will reach about 24 inches tall with a possible spread of 36 inches. I don’t really deadhead other than to spruce up for a photo.

The plant itself looks a little like a lantana but with lavender blue flowers and a cute cottage-looking yellow throat. Swallowtails, fritillaries and a host of other butterflies along with bees will visit the nonstop blooms.

I am in zone 8a sharing my experience on a plant that has award-winner written all over it. Even if it is an annual where you live, it will be worth every penny.

Next year will be a horticultural occurrence or phenomenon I don’t ever remember happening. It is going to be like the gold rush, except this time to get an award-winning plant. We can credit Brent Horvath, owner of ...Read More

Since 2018, Superbells Double calibrachoa varieties have won 67 awards, yet in my travels, gardeners seem to rarely venture off the single-petaled path. I admit that I have a flaming passion for the punch varieties like ...Read More

As I write this, I am on Day 211 of hummingbirds feeding at The Garden Guy’s house, marking the longest date on the calendar that I have had them, until hopefully tomorrow and the day after. I don’t use feeders, just ...Read More

Chenille, taffeta and velvet may sound like the hottest designer fabrics for 2023, but they are the newest Upscale Monarda, or bee balm, coming out this spring. The Upscale Monarda series from Proven Winners packs native ...Read More

My bride, Jan, said, "Those ornamental sweet potatoes you planted this year look better than they did last year." She was referring to a big display of Sweet Caroline Medusa Green that was draping over a rock wall.

Soprano impatiens made their debut this year and I can truthfully say I wish every flower I planted was this easy to grow. They arrived in 2022 with four colors: Orange, Bright Red, Violet Shades and White. In 2023, Salmon...Read More