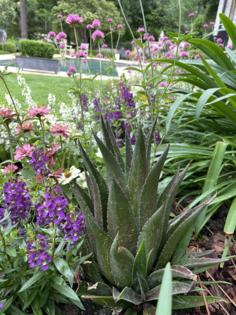 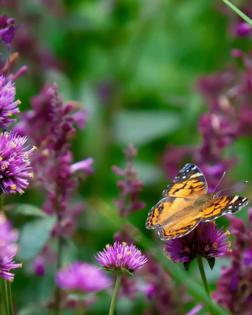 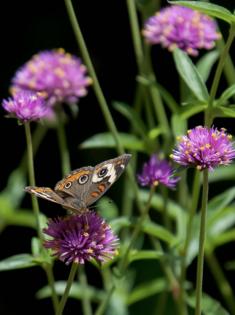 Flame Proof, Perfect Score All Season, Leader of the Pack, and Top Performer are just a few of the award designations for Truffula Pink Gomphrena. It has now taken in 50 such trophies. If your state has a flower trial competition, my guess is Truffula Pink has been a winner.

If you don’t know, Truffula Pink it is a globe amaranth. It is almost always grown as an annual that reaches about 24 inches tall and almost as wide. You can’t give it too much sun. It might be perennial in zones 9 and warmer. I live in 8a and had a patch that was perennial for me for a couple of years. I’ll explain its demise.

I planted it in 2019, and it returned in 2020 and was awesome. I never realized I planted it in conjunction with a chipmunk thoroughfare. In 2021 my granddog Alli, a 120-pound Dutch Shepherd, came to live with me for a year. Her sole existence became to rid Grand Dad of the chipmunks. The Truffula Pink area became pulverized. Today the chipmunks live happily and have found new joy in torturing Tootie the bichon.

This year in a way seemed like a second coming out party. It wasn’t with fanfare, but if you had your eyes open, you probably muttered a "holy wow" once or twice. One such moment for me was at Mississippi State University’s industry day at the Truck Crops Branch Experiment Station in Crystal Springs, Mississippi. It was a "why didn’t I think of that?" moment. Right out in the full scorching summer sun of central Mississippi was Truffula Pink gomphrena, standing so stately over this year’s hot new Augusta Lavender heliotrope. The lavender blue and hot pink were a perfect partnership.

The "why didn’t I think of that?" moments kept occurring for me, thanks to son James. Before I could tell him "you can’t do that," he was partnering Truffula Pink with Mangaves like Thunderbird and Silver Fox. If you aren’t familiar with Mangaves, they are hybrids between manfreda and agave. These come with a WARNING: If you start, you will not be able to stop. Just Google "Mad About Mangave" and enter at your own risk.

So, let’s visit the idea: Can you plant Truffula Pink with a plant that looks like it belongs in a Mexico desert? Sure, add some zinnias and angelonias or summer snapdragons and it will look like Sunday tea at Miss Betsy’s house. Any design you have in mind, Truffula Pink will make it better.

I would like to think I broke the mold a little. It wasn’t pushing the envelope by planting with Mangave, but I used them in a prairie-like look with the new Meant to Bee Royal Raspberry and Queen Nectarine agastache and Pyromania Blaze kniphofia or torch lily, and Rockin’ Playin’ the Blues salvia. I was mesmerized by the planting, and just like every other year, Truffula Pink has been a butterfly champion, bringing in buckeyes, American ladies and an assortment of swallowtails. The Garden Guy makes this promise: Truffula Pink will be among the most enjoyable flowers you will ever grow, whether it is an annual or perennial.

LOS ANGELES -- True confessions from a plant reporter and devotee of more than 40 years: My first foray into gardening was a pathetic disaster.

I was barely 20, struggling with depression and getting through college. My ...Read More

Gardeners, I am here to tell you that you must get Double Coded. You’re probably thinking that there must be a security breach affecting the landscape. I assure you: It is a cupcake. At least it looks like a cupcake, and...Read More

Imagine a plant so unusual and beautiful in your landscape you stare hypnotically at it every day. Go further and say, 100 days. That is precisely how I feel about Heart to Heart Burning Heart caladium, and the reason is ...Read More

Every gardener in the South knows fall is the best time for planting shrubs. As the cooler weather and shortened day lengths may have stopped leaf growth, the soil becomes ideal for root growth and thus the plant gets ...Read More