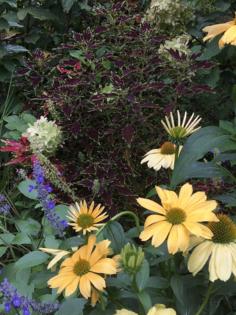 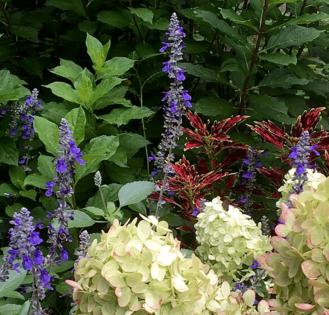 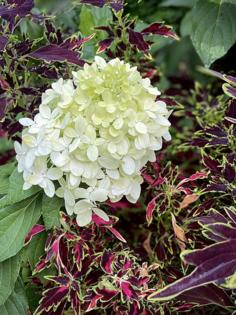 Just when you thought the gardening world would be content and that we didn’t need another new coleus, Mini Me Watermelon is rocking scorecards in university trials. Mini Me Watermelon is part of the ColorBlaze series. It will be making its debut in 2023 and is climbing the must-have plants chart.

Photos of trial plants at Mississippi State University’s Truck Crops Branch Experiment in Crystal Springs, Mississippi, and the University of Tennessee Gardens at the West Tennessee AgResearch and Education Center in Jackson, Tennesse, show incredible plants in full sun that, to be honest, may exceed mini.

Now perhaps mini describes the size of their leaves, and that would be just perfect. The small colorful leaves, described as watermelon to coral-colored with chartreuse accents, are absolutely stunning. I would add that as the sun shifts during the day and light gets filtered, the color looks even a royal burgundy with the chartreuse. But as soon as the sun returns, it's flaming again.

The mini might have been directed to the height, which is tagged at 20 inches with an 18-inch spread. Now, I did not go out and measure those in Mississippi and Tennessee. I did measure my plants, and they were 34 inches on Sept. 12. This doesn’t bother me in the slightest. My ColorBlaze Lime Time coleus out front, which is supposed to reach 34 inches, is now at 42, and I have been pinching all summer. I am deliriously happy about that, too!

This has been the year in West Georgia where everything has flourished. In July we thought we would perish with the nonstop triple-digit heat index numbers. Then in August and September, it has been like, "Lord, we thank you for our daily rain." Everything is much larger than usual. Consequently, plant partnerships or combinations have an exaggerated look.

Everyone thinks coleus combinations in containers and ColorBlaze Mini Me Watermelon already have their shares of prized recipes on the Proven Winners website. They deserve great partnerships in the landscape, too! At the Young’s Plant Farm spring trials, they had ColorBlaze Mini Me Watermelon combined with Luscious Lemon Tart lantana and Illusion Emerald Lace sweet potato, both of which echoed the coleus accent colors.

The Garden Guy’s combinations were a little lucky. I partnered mine in part with Limelight Prime hydrangea. I admit I always underestimate the summer growth they will put on. Hence, I have the glorious white panicle flowers intermingling with the coleus foliage.

In the overall design I have also included Rockin’ Playin’ the Blues salvia and Color Coded 'One in a Melon' coneflower, which will also be making its debut in 2023.

Eighteen selections will be available in the ColorBlaze series in 2023. They are among the most carefree plants you can grow, and they're worth every penny for your garden dollar. The maintenance I have already mentioned: Pinch to maintain bushiness and structure. I am also one who will pinch off flowers if they develop before I would like.

Although I grow coleus for foliage, the flowers do have some added value. In my area, the first two weeks of October are usually the last days of hummingbird activity. I will usually let a few coleus blooms develop in late September to offer any extra nectar that might be needed for the hummingbirds before they head to the tropics.

LOS ANGELES -- True confessions from a plant reporter and devotee of more than 40 years: My first foray into gardening was a pathetic disaster.

I was barely 20, struggling with depression and getting through college. My ...Read More

Gardeners, I am here to tell you that you must get Double Coded. You’re probably thinking that there must be a security breach affecting the landscape. I assure you: It is a cupcake. At least it looks like a cupcake, and...Read More

Imagine a plant so unusual and beautiful in your landscape you stare hypnotically at it every day. Go further and say, 100 days. That is precisely how I feel about Heart to Heart Burning Heart caladium, and the reason is ...Read More

Every gardener in the South knows fall is the best time for planting shrubs. As the cooler weather and shortened day lengths may have stopped leaf growth, the soil becomes ideal for root growth and thus the plant gets ...Read More

Today I am here to say, let’s give up the dog days and create a celebration of the tiger days of summer. I am not talking LSU, Auburn or Clemson starting football workouts. I am, however, touting states like Delaware, ...Read More