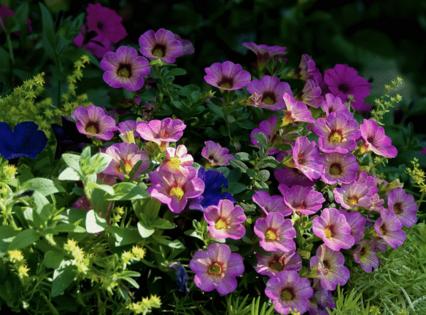 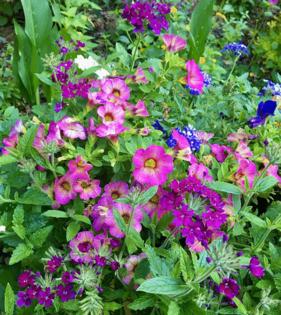 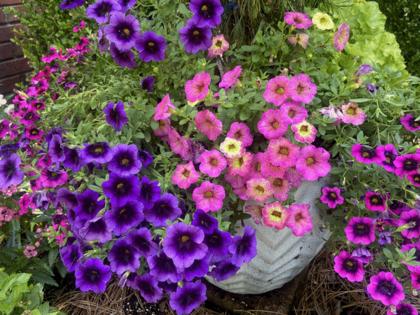 There is a new Superbells calibrachoa making its debut in 2023 that is so beautiful and unusual, I’ve even wondered if Proven Winners knows what they have. Had calibrachoas been around in 1800 as Empress Josephine was constructing the gardens at Le Château de Malmaison, Superbells Prism Pink Lemonade would have been her first choice.

While the name perhaps doesn’t sound like the Empress, each blossom looks as though it was already painted by her famed artist Pierre-Joseph Redoute. Rest assured, you have probably seen his paintings. Knowing this, his rose paintings are undoubtedly the best there have ever been. Old garden roses, obviously, but each heirloom rose, with its nostalgic or antique look, is precisely the feeling you have when you first look at Superbells Prism Pink Lemonade calibrachoa.

Perhaps Proven Winners does know what they have, as they say in its description, “this dynamic plant shifts its coloration through the seasons as it reacts to varying light levels and daylength.” In my trials, the shifting of coloration began almost immediately, which is nothing short of breathtaking. Proven Winners describes it: “the large blossoms open lemon yellow and transition to a vibrant pink with both colors continuously present on the plant.”

The color will work with everything except a flaming orange. That is simply The Garden Guy’s opinion until I am taught otherwise by some color design guru, which usually happens. Until this point, I have been so passionate about the Superbells Punch group, I felt that was all I really needed. I still love them, but when I placed Superbells Prism Pink Lemonade in between Superbells Grape Punch and Superbells Black Currant Punch, it was like the angels sang.

The next oohs and ahhs came when I used Superbells Prism Pink Lemonade surrounded by the soft needle-like foliage of Lemon Coral sedum. It was really pretty simple, and everyone can do it. The oohs came when the sedum started blooming with its uncountable tiny yellow flowers.

In another planter I combined the heirloom look of Superbells Prism Pink Lemonade calibrachoa with Superbena Royale Plum Wine verbena, which also has a certain nostalgic appeal. Then I spotted some blue with Superbena Royale Chambray verbena, giving the planter a floral bouquet-like look. The one special trait you will love, which was brought out in the PW official description, is its ability to give you different looks during the day as the sun moves from east to west and perhaps a tree lends a few brief minutes of shifting shade.

As we head toward August, I am feeling a tinge of panic because I love to plant all three supers — Superbells, Supertunias and Superbenas — in the fall around Oct. 1 here in zone 8a. The panic is, will I be able to get them? The garden centers really want me to plant pansies. Hey, I am willing to mix in a few into my designs.

Superbells calibrachoa are so much tougher than you ever dreamed. The real prerequisite is to grow them in containers. It is a rare gardener I find who can duplicate that perfect drainage in a landscape bed. Make feeding with a water-soluble fertilizer part of your regimen. The Garden Guy does it every other week. Then once the plant seems tired, open and worn out, don’t be afraid to cut back by a third or to healthy green leaves. This is usually in August in my area, but with early triple-digit temperatures, It moved to July this year.

The Garden Guy will never be without Superbells calibrachoas, and I am craving more of the look with the white AquaPots filled with Grape Punch, Prism Pink Lemonade and Black Currant Punch calibrachoas together. Oh yes, and I really would like to plant in October.

To me, this is the prettiest petunia I have ever grown. It is so pretty that if it only lasted a month, I would say I can hardly wait until next year. But it is a Supertunia, and therefore it will perform as suggested: a ...Read More

Luminary Sunset Coral has turned The Garden Guy into a full-blown phlox fanatic. The rousing color would probably remind you of some electrifying lipstick or fingernail polish, a rare color in the plant world.

CHICAGO — Victory Gardens Theater, a venerable and Tony Award-winning Chicago company that has seen more than its share of staff turmoil in recent years, appears to have entered another deeply unstable period.

Each year as my color design guru son James orders plants for use at his clients' homes, from those that look like historic cottages to palatial garden estates, those on the waterfront to those considered mountainous. The ...Read More

No longer will trays of flower transplants create a mess, a sore back from picking them up and clutter in the garden shed with thoughts of future use. Thanks to the Eco+ Grande Pots that caught most of us by surprise at ...Read More

A display at the recent Young’s Plant Farm Annual Garden Tour caused quite a stir — not only within the industry that day, but on my Facebook page as well. I would like to take credit and say it was my beautiful ...Read More