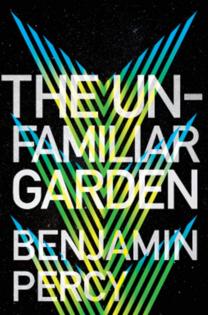 "The Unfamiliar Garden," the second novel in Benjamin Percy's speculative fiction series "Comet Cycle," begins with the mysterious disappearance of a child, Mia, in a forest outside Seattle. Right about that time, a comet shoots past Earth, emitting a strange fungus that begins to absorb plants, animals and humans. (And Mia? Maybe. But maybe not.) Percy's novel defies categorization — part sci-fi, part mystery, wholly absorbing. You'll be seeing a lot of Percy over the next couple of months; in addition to the novel, he has two comic series debuting this month with Marvel ("X Lives of Wolverine" and "X Deaths of Wolverine") and another new comic series (a revival of the old "Ghost Rider" series from 50 years ago) coming in February. The movie "Summering," which Percy co-wrote with director James Ponsoldt, will debut at the Sundance Film Festival later this month. Whew! Percy, who lives in Northfield, is the master of a multitude of genres — books on craft, literary fiction, thrillers and short stories. The hardest working man in Northfield? Maybe not. But maybe.

The Garden Guy would like to officially declare 2022 Encore Year of the Hardy Hibiscus. I don’t know how the National Garden Bureau judges the success of any particular year’s celebration, but I am feeling that ...Read More

CHICAGO -- Owen Keehnen remembers when the AIDS epidemic, which disproportionately affected the LGBTQ community, was at its height in the late 1980s. The gay community in the United States was still largely in the shadows,...Read More

The Garden Guy wasn’t stopping to smell the roses, but instead stared in awe at the form of a rosebud. Even though this new rose variety called Suñorita is considered a miniflora, the bud looked like a classic tiny ...Read More

The African elephant is known for having the longest gestation period of any animal, which lasts up to 22 months. This is the proverbial New York minute when it is compared to bringing a new shrub to market. Take, for ...Read More

Unlimited pasta was last served at the Orlando-based chain in 2019.

“As we look forward, we don’t know if we’ll bring and when we�...Read More

Planting conifers in mixed containers has been at the top of The Garden Guy’s fall and winter project list. My wife, Jan, doesn’t even know — this has really been a secret operation to get more conifers in the ...Read More