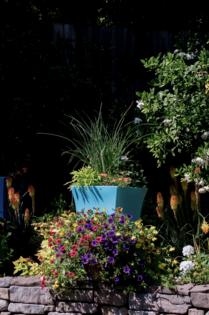 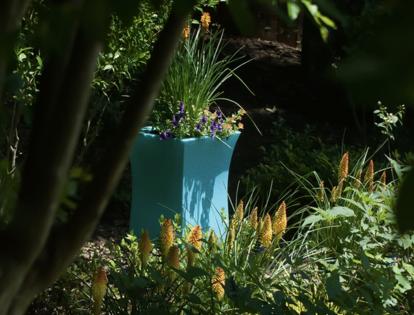 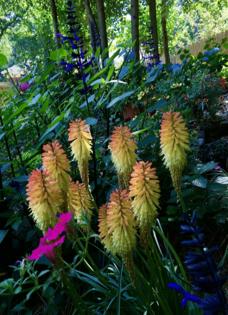 When they arrived and were sitting in the driveway, I told my wife, Jan, they had such a beautiful texture I would want them even if they never bloomed. Looking at the catalog that night, I selected Pyromania Backdraft and Pyromania Orange Blaze, two of the six varieties in the series that gives you choices in yellow, orange and red shades.

They were beautiful at both places and bloomed every year. Oddly I never saw anyone doing anything to them other than maybe pulling a weed or planting a companion. That tells you immediately they must not be too hard to grow.

My two selections that night have given me the most beautiful late spring season in my life. If they curled up and died tomorrow, I would say, "Wow, what a ride," and then do it all over again next year.

But they aren’t going to die. They are recommended for the most part from zones 5b to 9b. As I deadhead spent blooms, I see new bloom stalks developing. Even when not in bloom, the Pyromania Orange Blaze looks regal in my mixed containers, the shocking aqua blue ones Jan picked out.

The torch lily or Red Hot Poker is known botanically as Kniphofia, with its DNA tracing back to Africa. The Pyromania series are Kniphofia hybrids, reaching 30 to 36 inches tall with a 30-inch spread.

As a point of reference to their ease of growing, soil drainage is the requisite of paramount importance, and they need plenty of sun. Sunlight is my biggest challenge, as I am already cutting back salvias to give the Red Hot Pokers additional sunlight.

In your landscape you may be growing Ogon Japanese Sweet Flag and using it as a fine-textured grass. Perhaps you are growing Evergold Carex, a sedge, and using it as a fine-textured grassy element. You can do the same with the Pyromania series of torch lily or Red Hot Poker, whether they are in the landscape or as the thriller in a mixed container.

As the name suggests, the torch lily is in the lily family and looks like a grass except when it blooms, revealing some of the most beautiful flowers on the planet. The stunning flowers attract an assortment of pollinators, including hummingbirds.

As I eluded, the Pyromania Kniphofia hybrids are repeat bloomers. It is a sizzling show in the late spring and early summer, followed by additional blooms throughout the summer. In the landscape I am combining mine with the various colors of the Rockin' salvias. Whether Deep Purple, Blue Suede Shoes or Fuchsia, the combinations are highly complementary.

I am also combining them with Summerific Berry Awesome perennial hibiscus. Jan loves these but doesn’t even know they are out there yet. It will soon be a wonderful surprise, as I am seeing first buds start to form.

I am using the Pyromania Orange Blaze in the mixed aqua blue planters. These are the shorter of the Red Hot Pokers of the series and perfect in size. I have combined them with Superbells Grape Punch and the new Superbells Coral Sun calibrachoas in addition to Superbena Whiteout verbena and Illusion Emerald Lace Ornamental sweet potato.

The Pyromania series of torch lilies are waiting to add untold sizzle to your landscape when in bloom, and the perfect, fine-leaf grassy texture to contrast with all other foliage.

And yes, I was really holding a paper perennial catalogue that night — those are still really neat!

Shadowland Autumn Frost is an award-winning hosta that will stop you in your tracks.

Recently I posted a photo and called it a heart-thumping hosta. One of my Facebook followers said something rather meaningful: "You ...Read More

The answer given when the mayor asked a friend of mine in the nursery industry how best to improve the image of the small but growing city? "Plant flowers." You might think this would be the obvious answer from someone in ...Read More

Stop the presses and throw all of your preconceived notions about the monarda or bee balm out the door. I swear, I have had marigolds taller than these new monardas. I have more flowers now on my monardas than I normally ...Read More

If there were a color that represents happiness in the garden, it would have to be yellow. One of the three primary colors, it has the power to evoke hope and excitement. When the forsythia breaks forth in the early spring...Read More

There are gardens of untold beauty for whom the coral bells show — and I know many of you in the South desperately want them. Just think all of those pages of gorgeous heuchera varieties (coral bells) have their DNA ...Read More

Spring has been incredible at The Garden Guy’s house, and I am absolutely thankful for the Superbena Stormburst verbena. Swallowtails and hummingbirds came really early this year, not only in Georgia but throughout the ...Read More