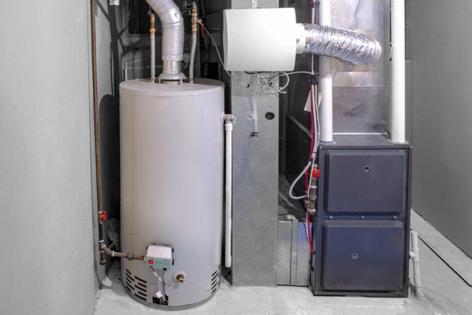 A few weeks ago, I had just finished writing my last story of 2022 — about how aging gas water heaters are prone to sudden failure, so don’t wait to upgrade to an electric heat pump model — when I heard the sound of a waterfall cascading through my Berkeley, California, home. Without warning, my nearly 17-year-old heater had burst, and I found myself in the very predicament I’d counseled against: without hot water for more than two weeks during an unusually cold December.

Installing another natural gas water heater would have been quick and affordable but it was also out of the question. I was determined not to lock in another 15-plus years of carbon emissions in a state where gas water heaters account for about 90% of the market. Heat pump water heaters, by contrast, are up to four times more efficient than a conventional model, as they extract warmth from the air to heat water rather than burn fossil fuel.

Getting a heat pump water heater, however, swiftly became an expensive and frustrating endeavor, even for someone who writes about home electrification and lives in climate-forward California. While everyone’s experience will differ, here are four important lessons from my crash course in home decarbonization.

Don’t wait until it’s too late

If your gas water heater is more than 10 years old, failure is definitely an option. Having a plumber annually inspect the water heater can help gauge its remaining lifespan, but even that’s not foolproof. When I had my then-16-year-old water heater checked in 2021, I was told it still had another year or two left. So like many owners of older homes who must triage needed repairs, I put a new water heater on the backburner. Replacing the leaky roof seemed far more urgent, given the intense atmospheric rivers pummeling California with torrential rain and wind.

Corrosion is often the cause of a burst water heater, which can result in thousands of dollars in water damage to your home and pose a fire hazard until the gas supply is cut. (Luckily, my gas water heater was in a crawl space equipped with a sump pump.) Replacing a gas water heater under duress also is not ideal, as you probably won’t be able to take much time to research your options and obtain multiple bids from contractors.

Be prepared for confusing contractor advice

Depending on your household income, the US Inflation Reduction Act provides a $1,750 rebate for heat pump water heaters, or a tax credit up to $2,000. California also offers its own $1,150 rebate, and an additional state rebate (amount to be determined) is set to become available later this year.

But to qualify for the $1,150 rebate, I would need to use a contractor approved by BayREN, a regional clearinghouse for state incentives for home electrification. So I arranged quotes from two BayREN contractors, assuming they would not only know how to navigate the rebate process — which requires certification that a new appliance meets certain standards — but would also be knowledgeable about heat pump water heaters and their installation.

Contractor No. 1 came to my 94-year-old home and pronounced my electrical system insufficient to handle a 240-volt heat pump water heater. The 200-amp electrical panel had plenty of capacity, but the utility “supply wire” and meter panel only brought 100 amps into the house. I would need to upgrade to 200 amps, a process that costs thousands of dollars and can take weeks, if not months. No. 1’s recommendation was to instead install a tankless water heater. Such devices heat water on demand and are more efficient than a conventional water heater, but still use natural gas.

What, I asked, about installing one of the new 120-volt, plug-and-play heat pump water heaters that don’t require electrical upgrades? No way, No. 1 replied. “We stopped installing those because customers complained” about how long they took to heat water.

Contractor No. 2 also refused to install a low-voltage heat pump water heater. He had no experience with them, but said he heard they were “problematic.” This contractor, however, said my electrical system could handle a 240-volt, 30-amp heat pump water heater, though it would push it to its limit.

“With any new product, there's a reasonable tendency to ‘wait and see’ if the product holds up under real-world use,” says Sam Calisch, head of special projects for Rewiring America, a nonprofit that advocates for community electrification. “Given the power of a negative review, I do think contractors are being reasonable when they are reluctant to install these models right now. But eventually, given potential job cost savings, these installs will become more standard and the market will follow.”

Nate Adams, a West Virginia-based home electrification expert known as the House Whisperer, says that contractors fear bad reviews. “The fundamental thing that we have to do is provide excellent experiences for both contractors and homeowners to achieve electrification, so bad reviews will absolutely destroy us.”

Do your own homework

Contractors often install products from specific manufacturers, so one may be a Brand X shop, while another routinely favors Brand Y. That means you might not be offered the right heat pump water heater for your situation if a particular contractor doesn’t stock it.

Both contractors No. 1 and No. 2 suggested I get a 50-gallon water heater, which seemed excessive for a two-person household. So I looked around for a less expensive 40-gallon tank and found a 240-volt model that operates on 15 amps rather than 30. I went back to Contractor No. 1. “It might work on your existing sub panel, I don't think that's gonna be an issue,” he texted. But, he said, that water heater “doesn't qualify for any of the rebates.”

Actually, it did. I found the water heater on a list of approved products that the issuer of the $1,150 rebate publishes. Back to Contractor No. 2, who confirmed the model qualified for rebates but declined to install the 15-amp version, saying the higher voltage water heater was the “only one we offer in 40-gallon.”

Both water heaters were hybrid heat pump water heaters, which means they can tap electricity to help heat water when needed, to supplement the heat pump. Contractor No. 2 pointed out that most of the time the water heater would be operating in heat-pump mode and drawing a maximum of 10 amps. Even if a boost is needed from electricity, it would draw 21 amps.

Reassured that I wouldn’t blow up my electrical panel, I asked for bids.

Get ready for sticker shock

Two years ago, I had received quotes on a heat pump water heater for a story I wrote on home electrification, so I thought I had a good idea of the cost. It turns out I had no clue. Contractor No. 2’s bid before rebates was an eye-popping $7,821, excluding a required $273 inspection fee to obtain the rebate. That was 70% more than the same contractor bid in December 2020. Contractor No. 1’s bid came in even higher, at $8,447.

“Our labor and materials costs have dramatically increased in the last few years,” No. 2 told me, adding that the company’s profit margin was around 15%. The heat pump water heater I chose retails for about $1,800 to $2,000 and California contractors are themselves eligible for a cash incentive per installation.

Adams confirmed that pandemic-era cost spikes “are off the chain, like between like 40% and 80% increases.” A California database shows that between August 2021 and June 2022, 73 households in my county received rebates for hybrid heat pump water heaters, installed at an average cost of around $6,800. Across the US, Adams says installation costs range from $4,500 to as much as $10,000. It’s also “really genuinely difficult to find enough people to do the work,” he notes. “The labor shortage we're in is going to be for a long time.”

In the end, I opted to go with Contractor No. 2, in part because the company deducted the $1,150 rebate from the purchase price and friends reported a good experience with the firm. The installation took about six hours and went off without a hitch, and though my bank account took a big hit, the hot water is flowing again, gas-free. Now to deal with my 28-year-old gas furnace.

Credit cards with rewards are rewarding only for those who know how to profit from the system, according to a paper released by the Federal Reserve.

Consumers with higher credit scores benefit the most because they tend ...Read More

For many, retirement is the coveted goal post at the end of a rewarding career.

It allots more time to spend with family and in the comforts of home. Though it represents the end of full-time work, it does not always mean...Read More

Finding ways to prepare for a recession or weather high inflation can be even simpler than cutting back on spending and increasing your income. Sometimes, it first comes down to finding the right place to bank.

As early applicants to a Florida state-funded home improvement program analyze their wind-mitigation inspection reports, some say they are confused about what home-hardening improvements will be eligible for up to $10,000 ...Read More

Ken Griffin’s Citadel churned out a record $16 billion in profit for clients last year, outperforming the rest of the industry and eclipsing one of history’s most successful financial plays.

Thousands of short-term vacation rentals could be contributing to the rental crisis in South Florida, where it has become harder to find affordable places to live, according to a new study.