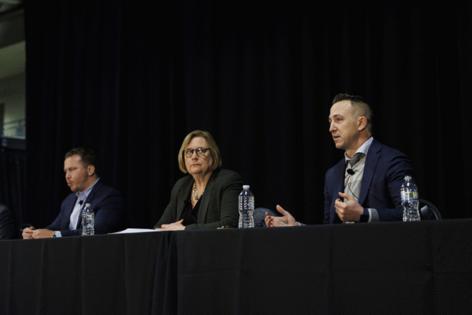 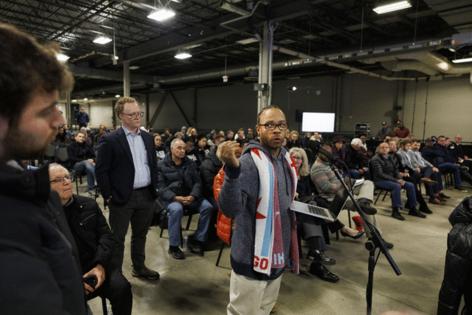 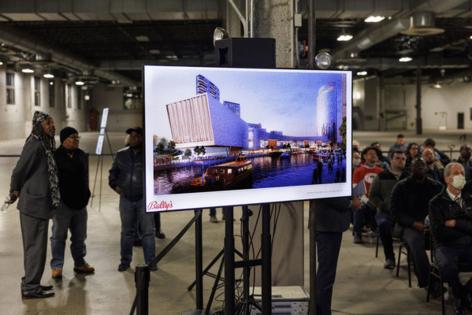 CHICAGO — Plans to build a permanent casino and entertainment district in Chicago’s River West continue to evolve based on feedback from residents, Bally’s officials said at a community engagement meeting for the project Monday evening.

As outlined Monday, the design now includes more greenspace and an additional road connections into the riverfront district to address traffic concerns. That followed an earlier decision to nix a proposed pedestrian bridge over the river following community pushback.

During 90 minutes of public comment during Monday’s meeting, several speakers praised Bally’s willingness to adjust designs after receiving feedback, describing Bally’s approach to community engagement as “fair.” But concerns of increased traffic and noise pollution linger from people living in the surrounding neighborhoods.

The Bally’s casino is set to temporarily open in June at the historic Medinah Temple in River North and operate for three years while demolition and construction is underway at the current site of the Freedom Center, the longtime home of Chicago Tribune’s printing operation. The temporary casino plan has yielded its own concerns about the impact on the neighborhood and the building.

In addition to the casino, the Rhode Island-based company’s $1.74 billion plans for the permanent site include a hotel, theater and a music venue surrounded by greenspace.

“We want people to come in through the green and really enjoy their time whether or not they’re going to the casino,” said Brad McCauley, a landscape architect with the firm Site Design Group.

The current design focuses on building a casino at the center of a “series of experiences,” including the development of a river walk along the west side of the North Branch, lined with restaurants, bars, seating areas and access to the water all leading up to a park and the theater, said Christine Carlyle, director of planning at the architectural firm SCB.

Tim Doron, a senior traffic consultant at the firm Fish Transportation Group, said traffic is expected to increase at night, but not during rush hour.

To deal with the increase in vehicles the casino will bring to the area, the project involves more than 30 traffic improvements, Doron said. The first phase will add new signals and retime existing ones. Later development includes extending Huron, Ancona and Erie streets east towards Jefferson Street.

Several community members emphasized the necessity of created designated bus and bike lines on Halsted Street to ensure safe public transportation near the site. One resident of a condominium building on North Larrabee Street across from the site raised concerns about the potential for increased noise and light pollution.

Ameet Patel, senior vice president of Bally’s West regional operations, said the plans are not intended to create a “glitzy Las Vegas strip joint” and that bright lights and loud concerts will be inside. Outdoor spaces will be preserved for public recreation.

Monday’s meeting was the last public engagement event before a Chicago Plan Commission hearing on Dec. 12 for the proposed zoning amendment for the site of the casino.

Bally’s won a competitive bid for the Chicago casino with the backing of Mayor Lori Lightfoot in May. The city asserts the River West development will bring in $200 million in annual tax revenue to the city.

Mortgage rates in the U.S. fell for a fourth straight week.

Mortgage costs have come down almost a ...Read More

Q: Our condo recently passed a special assessment to make us pay for some improvements to the pool area that are a waste of money. What happens if I refuse to pay since I disagree with how the money will be used? — Alfie...Read More