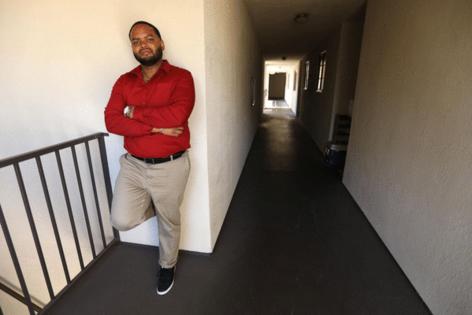 Robert Gardner said he knew it was time to move after he came home to find his Valley Village apartment broken into and ransacked.

He originally moved there for safety, a change the South L.A. native comfortably afforded on minimum wage because a coveted Section 8 voucher covered most of the rent.

But recently, Gardner noticed more drug dealers outside his apartment. One neighbor's car was broken into twice; another's was vandalized.

After his own break-in, he'd wake up in a sweat, fearing another intruder.

He wanted out, but there was a major problem: Leasing agents for other landlords repeatedly told him they didn't accept Section 8 vouchers.

"I just keep hitting a brick wall," Gardner, 32, said. "I was like, 'I am never going to get out of this apartment, and something is going to happen to me.' "

More than two years after a law in California made it illegal for landlords to refuse to rent to people who pay through Section 8 and other subsidies, leasing agents routinely reject tenants because of their vouchers or illegally discourage their applications, according to tenant advocates and state officials.

Like the state, the Housing Rights Initiative, a national investigative nonprofit, has sent people to pose as renters in L.A. and test whether landlords accept Section 8.

With construction costs for new homes and interest rates soaring, vacant housing is drawing more attention as a shortcut to quickly getting more units on the market.

But whether vacant homes are a curse or an opportunity ...Read More

To solve the problem, some states have transformed the ...Read More