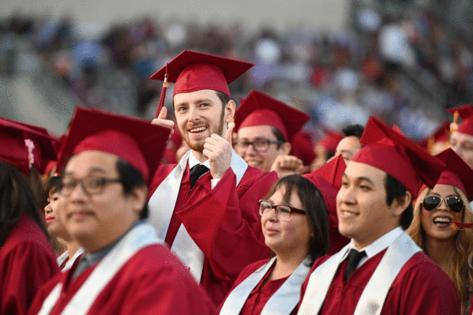 To solve the problem, some states have transformed the accounts into automatic programs that help all families — especially the disadvantaged — imagine a college future for their kids and save for it.

The moves come at a time when even relatively affluent families are struggling to afford college. Adjusted for inflation, the average cost of tuition, housing and fees at public U.S. colleges and universities increased by about 64% between the 2000-2001 and 2020-2021 academic years, from $13,005 to $21,337, according to the National Center for Education Statistics.

California in August formally launched CalKIDS, the nation’s largest children’s savings account program. CalKIDS will automatically set up college savings accounts with initial deposits of up to $100 for every baby born in California on or after July 1, 2022. In addition, it will make a deposit up to $1,500 for each of the 3.4 million low-income public school students in first through 12th grade.

“We are trying to create a college-going culture that is inclusive to all in a manner that is equitable, especially for the underserved and underrepresented in higher education,” said Martinez, a principal architect of CalKIDS.

Since 2013, at least five other states — Illinois, Maine, Nebraska, Pennsylvania and Rhode Island — also have enacted automatic college savings accounts with seed deposits for every child born or adopted in the state. Nevada provides savings accounts for all kindergarten children in public school.

Universal children’s savings accounts are a complicated commitment for states as the programs are expensive, and each account can last over 20 years, requiring the state to track individual deposits, balances and disbursements over decades.

Children’s savings accounts often are structured with state 529 plans that allow parents or family members to save for higher education in tax-advantaged accounts. More affluent families typically have more resources to put into 529 plans.

Children’s savings accounts, also called children’s development accounts, involve an initial or seed deposit from a sponsor – such as a state or city government, community group or foundation – and may require parents to sign up for a 529 to access the deposit.

Rising mortgage rates, recession fears and a volatile stock market have all tamped down home sales and prices in recent months...Read More

Q: I read your answer about damage by a neighbor’s tree falling on your house being your responsibility and not the neighbor’s. I have heard this before, and it is hard to wrap my head around. I have neighbors on both ...Read More