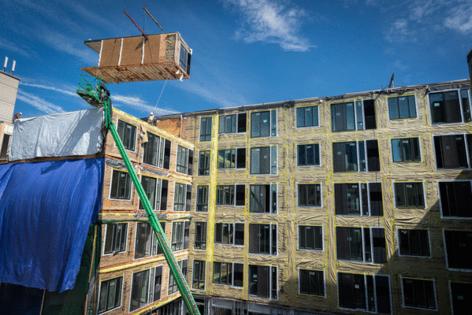 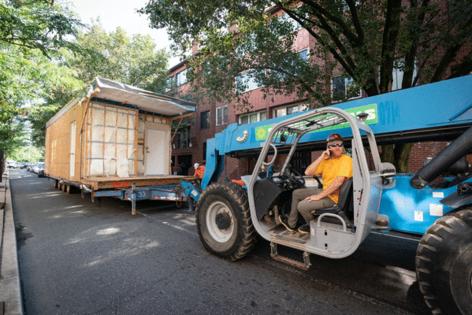 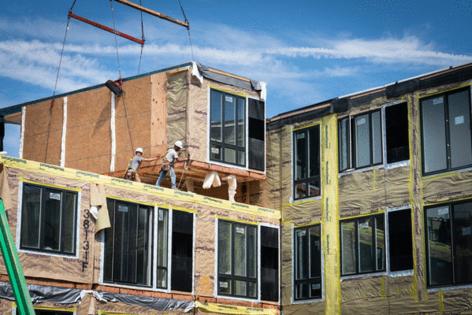 One morning last month, a crane swung massive boxes across a clear blue sky and gently slotted them among the apartments under construction at 23rd and Race Streets in Philadelphia. Inside the boxes were toilets in bathrooms, closets in bedrooms, countertops in kitchens — all the makings of homes.

The 160-unit Edgewater II is one of the latest projects by Alterra Property Group that uses modular construction — in which homes are built in pieces off-site and fitted together like LEGOs. LVL North at Broad and Spring Garden Streets is the Philadelphia developer’s largest modular property with 410 apartments. It began leasing this spring.

That’s also when the company broke ground on another mixed-use modular project with 275 apartments at 43rd and Chestnut Streets. The firm plans to keep building this way as much as possible. Given the pace and scale of the projects, Leo Addimando, cofounder and managing partner, said he’s gotten calls from fellow developers seeking tips.

As construction costs have risen, developers “are more willing to try new things,” he said. “And for them, it’s a new thing, even though it’s not a new thing.”

Philadelphia developers have tried the building method on and off for decades with various success. It’s still only a sliver of the total construction industry — between 5% and 10%. But in recent years, modular construction has gotten more popular in the city, and industry watchers say its appeal will only grow, as builders strive to cut increasing costs, attract more workers, and meet renter demand.

The method won’t take over how builders build, said Laura Dwyer, chair of the Building Systems Council Board of Trustees at the National Association of Home Builders. But more association members are building portions of their projects off-site.

Philadelphia-based Mosaic Development Partners has been using modular construction for more than a decade and sees it as a way to keep rents down.

“It’s something we believe in that makes a lot of sense from a design and affordability perspective,” said Greg Reaves, cofounder and chief executive officer. “We are firm believers that it is the way to build.”

The Southern California median home price remained unchanged in August from the previous month as rising mortgage rates made houses even less affordable for many people.

A proposal to build a luxury hotel in a swanky, wooded enclave of Benedict Canyon has pitted some of L.A.'s biggest deal makers, movie executives and celebrities against each other in a pitched battle over the future of ...Read More

Americans are seeing the fastest wage growth in decades, and the majority of workers in a Bankrate survey say they’ve gotten at least some kind of income boost over the past 12 months — but the hottest inflation in ...Read More