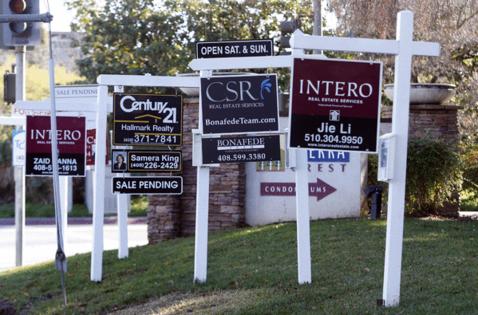 As rising mortgage rates continue to cool the housing market across the U.S., the Bay Area in July saw the largest monthly drop in home values of anywhere in the country, according to a new report from home listing site Zillow.

The average value of a single-family home in the San Jose-Sunnyvale-Santa Clara metro area fell 4.5% from June to July to $1.56 million. Home values in the San Francisco-Oakland-Berkeley metro, meanwhile, decreased 2.8% to $1.44 million.

Jeff Tucker, a Zillow senior economist, said it’s not surprising the Bay Area is experiencing the sharpest declines as mortgage-rate spikes squeeze buyers out of the market.

“The number one reason is that it’s the most expensive place in the country,” Tucker said. “Buyers were already stretched to the breaking point.”

Over the past two-plus years during the pandemic, Bay Area home values soared as house hunters — many untethered from the office by remote work and buoyed by historic-low mortgage rates — were locked in a mad scramble for homes, sometimes bidding hundreds of thousands of dollars over the asking price.

But as the Federal Reserve raised the cost of borrowing in recent months in a bid to slow runaway inflation, mortgage rates have spiked accordingly, cooling the frenzied demand and record-high prices. Currently, the average interest rate for conforming and jumbo 30-year fixed home loans is between 5% and 6%. While rates have dipped in recent weeks, they’re still around double the sub-3% rates available during the depths of the pandemic.

Even that small percentage increase in mortgage rates can have a drastic impact on the true cost of actually buying a home.

Compared to July 2019, the mortgage payment on a typical home in the San Jose metro is up 60% to $8,371 a month (including taxes and insurance), according to the report. That’s more than double the median rent of $3,369.