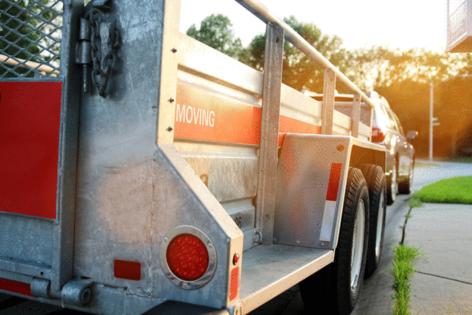 The lowest decrease was in Maine, at 1%. The number of moves to Delaware declined by 3%, and it dropped by 4% in Michigan, Mississippi and New Mexico.

Nationwide, the number of moves in May and June was 9% lower compared with the same months in 2021. Moves were up in the spring of 2021 compared with 2020.

"A lot of people may be feeling locked in, like they can't really buy someplace else or if they're renters, that any other place they lease, the increase would be even worse," said Riordan Frost, a senior research analyst at Harvard University's Joint Center for Housing Studies who has studied moving trends. Both rents and home prices saw record increases last year.

Unpublished research from Stanford University shows the latest cooling continues a "doughnut" trend from the pandemic, with more people moving out of downtown areas of the largest cities as well as a decline in the number of people moving to nearby suburbs. Only exurbs, low-density areas in the orbit of cities, saw gains in new residents.

"The housing boom is now ending as interest rates rise rapidly," said Arjun Ramani, co-author of a paper on the doughnut effect published last year by the National Bureau of Economic Research.

Mortgage rates reached 5% in mid-April and 5.8% in June as the Federal Reserve raised short-term rates in an attempt to control inflation, which drove both rents and home prices to dizzying heights over the past year. Rents and home prices rose faster in suburbs and exurbs, reflecting increased demand for homes there, according to data provided by Zillow Group, Inc., a Seattle-based real estate information company, and analyzed by Stanford University, where Ramani conducts his research.

One reason that fewer people are moving into downtown areas may be that young people can no longer afford to live there, said Harvard's Frost, who pointed to research from Virginia Tech showing that young professionals are still interested in city living. Echoing that point was Kevin Erdmann, a senior affiliated scholar at George Mason University's libertarian Mercatus Center in Virginia.

The largest metro areas such as New York City and Los Angeles, where many people want to live, aren't building enough housing. Wealthier people are driving up prices for the limited housing supply and displacing residents with lower incomes, said Erdmann, who is based in Phoenix and maintains that home building is over-regulated in many large cities.