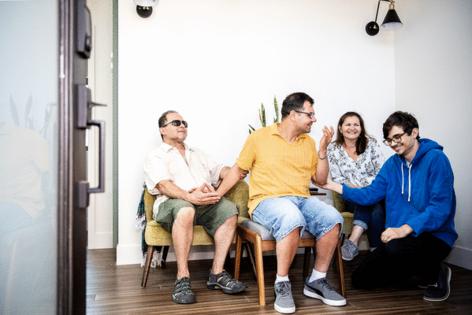 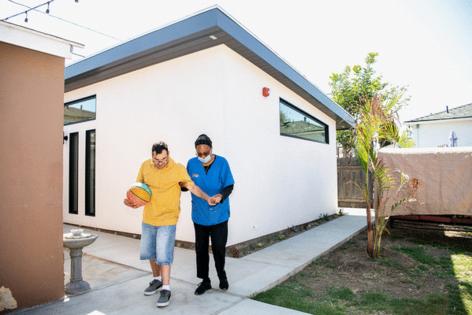 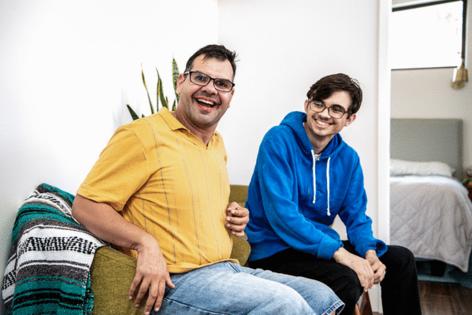 "Adrian likes to touch everything," explains his mother, Andrea Villicana. "When the ADU was completed, he knocked on all the walls and tested the acoustics. He likes to help. He's a big helper."

Villicana has long worried about long-term care for the 33-year-old Perez, who is developmentally disabled and nonverbal due to health complications when he was a baby.

"My biggest fear is what is going to happen to Adrian when I'm no longer here," she says of her son, who lives at home with Villicana, her husband Joey Chavez and their son Alex, 18. ("We sound like a Mexican law firm," Joey jokes of their blended family.)

Consequently, when a counselor at the Westside Regional Center, a state-funded organization that helps clients with developmental disabilities, asked about their long-term plans for Perez, Villicana decided it was time to start researching housing options for her son.

"Group homes are fine, but not for Adrian because he can't speak," says Villicana, 58. "He's extremely vulnerable. I wanted him to be close to home and his younger siblings. I was told that parents often rent an apartment for their child but ... try renting an apartment on the Westside."

After seeing the explosion of accessory dwelling units, or ADUs, throughout Los Angeles — small-scale homes, or granny flats, built on single or multifamily home lots — Villicana wondered if Adrian, who attends an adult day program, could live with a caregiver in a similar house in their backyard.

"The idea intrigued me," she says. The arrangement also would work well for Alex, who will eventually inherit the family's home. In theory, they both could live independently: Perez with an aide in the ADU and Alex in the front house.

In an effort to find out more about ADUs, Villicana attended a remote class taught by real estate agent-turned-certified construction manager Monica Higgins at West L.A. College. In the class, Higgins covered the permitting and design process, budgeting and the latest housing laws, which have changed over the years to help alleviate the state's housing crisis.

"Building an ADU can be confusing," says Higgins, who became a consultant after watching her mother grapple with a difficult renovation project. "It's not a new phenomenon, but the laws have changed and it's hard to figure out how it impacts homeowners. It all boils down to having conversations with the homeowner and determining their 'why.' That is what is going to drive every decision. It's critically important to know what they want."

For Villicana and Chavez, their "why" was clear: An ADU would allow Perez to live near his family and have around-the-clock care.

Following the class, the couple hired Higgins, who tapped architect Marlene Ramirez and contractor Steven Laszlo of Graystone Builders to design and build a 500-square-foot ADU behind their home on the 6,500-square-foot lot.

Knowing how traumatic it can be to move a child with disabilities out of a familiar family home following the death of a parent, Villicana says she wanted to act now, rather than rush to finish the project when the circumstances might be more urgent.

Ramirez conceived three housing options for the family: a detached ADU, an ADU that would be attached to the garage and an ADU placed on top of the garage. The couple chose the detached ADU configuration because it would offer the easiest access for Perez, who has balance issues. It also would preserve the garage, which the family uses as a workshop and a portion of their backyard.

Over eight months, the team built the ADU for about $260,000, with some delays and cost overruns due to global supply-chain issues. Anticipating this, Higgins ordered all of the materials specified by Ramirez at the beginning of construction, including windows, doors and appliances.

"People are always surprised by how much things cost," Higgins says. "They watch HGTV and use Waco, Texas, as a framework for their project in California. People need to think about what a price quote means. Is it for construction, or everything? Architects, engineers, site surveys, HVAC consultants and permitting are not free."

Designed with Perez in mind, the ADU features smooth wood floors and wide, wheelchair-accessible doors. In addition to the main bathroom, which includes a curbless shower with a handheld shower head, a powder room was added to provide privacy for potential caretakers. "I want them to have their own restroom, rather than go through Adrian's room to use his bathroom," Villicana explains.

The bathroom also features a pull-down support bar next to the toilet, easy-access shower controls and a custom corner vanity with two shelves that can be altered should Perez ever need a wheelchair.

The one-bedroom ADU has a midcentury feel with simple lines, easy access to the outdoors and an open Ikea kitchen with striking gray-green cabinets.

To add light and privacy, Ramirez included raised clerestory windows and multiple skylights. The front door, which is installed on the side of the ADU rather than facing the main house, provides further privacy and easy access to the garage and yard. A small living area off of the kitchen is a flexible space that can be used as a living room, media room or office.

For Villicana and Chavez, who grew up in Mar Vista and have known each other since they were 10 (the couple reconnected in 1996 after their first marriages ended in divorce), having family close is important. So is having options.

Villicana, who chose to hire Higgins despite paying more for a consultant, says it was worth it. "It worked out in every way," she says. "I didn't have the time or knowledge to keep up with everything. Monica basically did everything for me. She came every day. She filled me in on the glitches. When we ordered the kitchen from Ikea, the installer couldn't put it in place for six weeks so Monica found someone who could."

To Villicana, the project is everything she had hoped for: an accessible space, close to family, that ensures the health and safety of her son.

"While Adrian can't own property, at least he has a place in the back where his siblings can watch over him," she says. "We feel so fortunate to be able to do this. We can keep our family close."