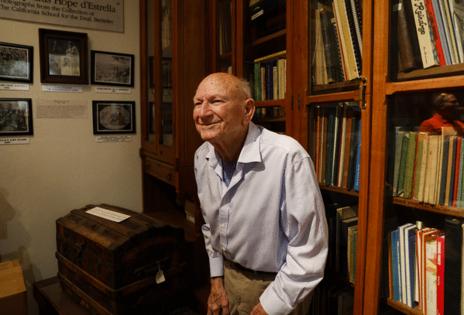 One year ago, after working for more than a decade at the school, and living out of his van, Vezina saved enough money to buy a house in Sacramento with the help of a roommate. He lives there on weekends, but to avoid the fatigue of long commutes and soaring gas prices, he lives and sleeps in his van during the week.

He is not alone. Many teachers at the school make long commutes, or double up with family or roommates because they cannot afford housing nearby — or are in the same position as Vezina.

“I’ve made a big sacrifice to live in my van because there’s no housing I can afford here,” signed Vezina, who is deaf. “I just want to make sure I can stay here at this job … I chose to work at the school to help the children and the community, and that’s where I can use my skills to the fullest extent.”

The staffing situation has grown so dire that the school’s future is at risk. To combat problems with recruitment and retention of staff and teachers, organizers from the California Deaf Community, led by Ken Norton, 96, a former dean of students and alum of the school, are leading an effort to build teacher housing on a portion of vacant state-owned land where the campus is located.

They are circulating a petition advocating for the housing — signed by more than 1,500 people — addressed to Gov. Gavin Newsom, State Superintendent of Public Instruction Tony Thurmond, the California Department of Education and the Department of General Services.

“We support the long-term solution of building staff housing on an available state-owned parcel of land on the CSD-F campus,” the petition reads, in part. “This housing would provide limited-time, low-cost housing for new and current staff to have time to save for a downpayment on their permanent housing.”

The California Department of Education owns the land and operates the school. The department would have to approve the proposal for it to move forward.

Maria Clayton, a spokeswoman from the department, said they have received information about the request and are aware of the online petition, and the proposal is under review.