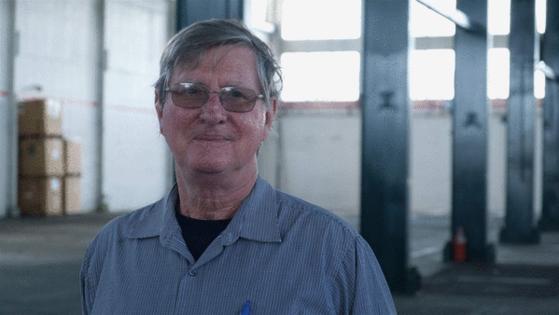 Long after childhood, McDonald felt an affinity for the factory, where American Steel once fabricated heavy-duty logging equipment until the timber industry waned in Oregon.

Now, as the executive director of the local Society of St. Vincent de Paul, McDonald has made a career of turning other people's castoff goods into cash to support low-income housing and the charity's other anti-poverty initiatives. He easily imagined a creative reuse for the midcentury factory, a space flooded with natural light from paned-glass windows high above the manufacturing floor.

"I looked at this building and said: 'Someday, I would like to own that building,'" McDonald said. "Old industrial buildings are just kind of fun."

Over the next year, McDonald and his team will transform the massive space into a nonprofit manufactured home factory capable of producing as many as 80 homes a month.

Known as the HOPE Community Corporation, it's a unique nonprofit venture, supported by $15 million in housing money from the Oregon legislature. Once the group is up and running in 2023, HOPE could employ more than 100 people to build factory-built homes for low-income families, at a time when many states face a critical housing shortage.

Nationwide, there's an estimated shortage of about 3.8 million housing units. The shortfall has many causes, including growing investor ownership of homes, but it stems largely from a construction slowdown that began in 2008 during the Great Recession and never regained the momentum to meet present-day need.

There are repercussions not only for homelessness but for nearly everyone looking for a place to live — buyers can't afford ever-increasing prices, and renters face escalating rents.

Apartments are scarce, too, especially those for lower-income renters, according to a recent study by the National Multifamily Housing Council and the National Apartment Association. Three states alone, California, Florida and Texas, will require 1.5 million new apartments by 2035, the study found. As supply chain bottlenecks persist and interest rates and borrowing costs rise, the housing shortage could worsen without intervention.

Because manufactured homes are built on an assembly line, they're less expensive and faster to construct. They're seen as essential for providing new housing, especially for lower-income buyers who may have been priced out of site-built homes or expensive rental markets. Many housing experts see factory-built homes as an effective way of meeting current housing needs, especially in rural areas.