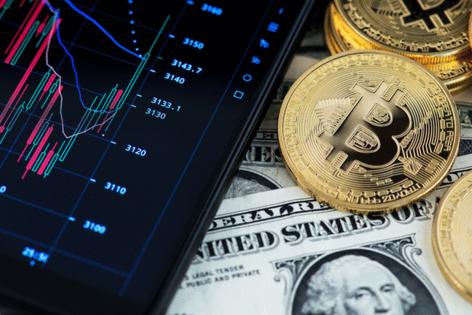 If you lost money in cryptocurrency this year, there's a bit of good news. You can claim that loss on your taxes.

This year has been a period of massive losses, with the most popular currency, Bitcoin, trading at above $68,000 in November, then crashing to $22,900 this month.

The bear market in crypto erased $2 trillion in market value and led to several bankruptcies among crypto firms like Celsius, Voyager Digital and Three Arrows Capital, among others.

However, you can claim crypto losses and offset gains in your portfolio, say Philadelphia-area accounting experts.

Trading generates gains or losses every time you buy, sell, or even exchange virtual currencies.

That's because the Internal Revenue Service treats crypto as property, just like stocks or real estate, according to tax expert Elisabeth Felten, assistant professor of business at DeSales University.

Just like stocks, crypto sales and exchanges are reported on IRS forms 8949 and Schedule D, and are subject to the same limits, said Michael Gillen, head of tax accounting at Duane Morris in Philadelphia. That is, taxpayers are limited to a $3,000 capital loss, which you can use to offset other income, and losses greater than $3,000 can be carried forward indefinitely and used to offset income on future tax returns.

The IRS prevents investors from selling stocks at a loss and immediately buying back the stock within 30 days. It's called the "wash sale" rule.

But for now "no such rule applies to crypto, as the IRS classifies crypto as property and not a security," notes EisnerAmper accountant Brian McFarlane in a blog post.

That means "an investor can do what is called 'tax-loss harvesting' — sell their position in cryptocurrencies for a loss, then repurchasing right away," Felten explained.

This current loophole for crypto investors was supposed to end if the Build Back Better Act passed through the U.S. Senate — but the legislation has stalled and the loophole remains.

Crypto investor and cheerleader Anthony Scaramucci, who became a household name during his short stint as President Donald Trump's communications director, has been humbled.

The SkyBridge Capital founder acknowledged in a recent CNBC interview that his concentration in crypto was a short-term "mistake." Though he said he still thinks of crypto as a long-term winner: "I want to measure the Bitcoin investment over a four-year interval."

Investors with SkyBridge aren't happy. Scaramucci told DealBook on Wednesday that investors were trying to withdraw up to $890 million from SkyBridge's flagship fund, and Bloomberg reported two days earlier that SkyBridge had suspended investor withdrawals from another one of its funds.

Who regulates cryptocurrencies in the U.S.? At this point, it's a turf war.

Agencies are still staking out territory over which agency will oversee crypto, and that's left an enforcement vacuum and investors fending for themselves. That's despite large firms such as Fidelity starting to allow investors with 401(k) retirement accounts to buy Bitcoin.

"Anytime there's a crash, like now or the 2008, investors ask, 'Why aren't regulators doing more?'" said Wharton professor Kevin Werbach. He testified before Congress this year on "Demystifying Crypto: Digital Assets and the Role of Government" on the need for smart regulation of this new asset class.

Securities attorney William "Bill" Singer argues that agencies like the Securities and Exchange Commission need to act aggressively — and soon.

"Those victimized will see it as too little, too late," said Singer. "While the SEC has been issuing press releases about new rules and initiatives, a lot of time has been wasted."

At some point, regulators will want to know "whether investors were warned of the very issues that have now arisen and have damaged their investment," said Singer, publisher of the BrokeAndBroker blog. "The very same folks now urging caution and patience sure as hell didn't mention either of those words when pumping the promise of crypto."

The crypto industry "is spending more money lobbying in Washington than the defense industry" to influence which agency will regulate, said Hilary Allen, a law professor at American University. "The turf war is really starting to heat up."