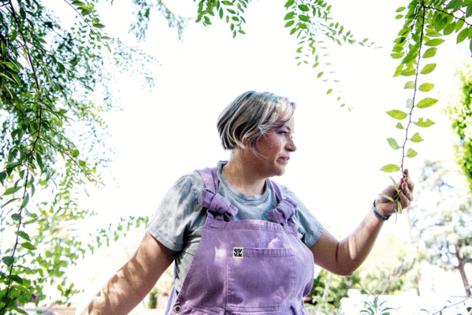 LOS ANGELES -- Even here, in the scorching summer heat of Altadena, California, Seriina Covarrubias' front yard feels cool and inviting under the dappled shade of a magnificent elm tree.

"I thought it was going to take longer for a natural habitat to materialize," Covarrubias says of her two-year-old garden, which is filled with fragrant coastal scrub.

"The birds feel so comfortable here they made a nest on the ground," she adds, reaching down to reveal a black phoebe's nest beneath a foothill sedge (Carex tumulicola).

More than thirsty birds have flocked to her garden since she tore out her lawn and replaced it with mostly drought-tolerant plants native to Southern California. Other wildlife has returned, including lizards, ladybugs, praying mantises, bees and caterpillars.

So have her neighbors. While any visitor can appreciate the thriving ecosystem from the sidewalk, many visitors often take it a step further. As Covarrubias' husband, Kevin Rowles, a film editor, put it: "When people walk or drive by, they stop and take pictures of our yard."

The couple, who are both 40, had long wanted to have a garden instead of a lawn. A death benefit following the loss of Covarrubias' father, Robert, in June 2020, assisted by a turf removal rebate from the state, provided the couple with enough money to remove the thirsty Bermuda grass and start anew. (The couple estimate they paid around $10,000 for the transformation, including turf removal, design, irrigation and plants, and received $3,000 from the state for removing 1,500 square feet of grass).

Two years before the Metropolitan Water District of Southern California declared a water shortage emergency and ordered outdoor watering limited to two days a week, the couple knew they wanted to install plants that could endure the heat with little watering. However, there were other motivating factors: The front lawn was "an eyesore," which meant they never used the yard.

"It didn't serve a purpose," says Covarrubias, who is a project manager for an internet development company. "We wanted something that we would use and enjoy."

For Covarrubias, who suffers from mast cell activation syndrome (MCAS), an autoimmune disorder that causes her to have severe allergic reactions to things like dirt, the dusty makeover would need to be expeditious to help alleviate her allergies. So the couple hired Asarel Garcia to remove their lawn and landscape designer Julie Deamer at Yard Queen to help with the garden design and plant choices.

Going in, Covarrubias knew she wanted a permeable riverbed, a Japanese-style Zen rock garden and a variety of plants for sentimental reasons — a selection of roses to honor her father, heat-tolerant wisteria that would hang from a canopy and greet visitors as they entered the garden, and white sage in honor of Sage, the couple's Australian shepherd. Many plants, which she never considered, were a welcome surprise: 'Mystic Spires Blue' salvia, purple fairy fan flower, Scaevola albida 'Mauve Clusters' and the native shrub toyon, or California holly.

Working with Garcia, the couple removed the boxwood hedges that faced the street and installed new planters, which Covarrubias filled with sun-loving California buckwheat (Eriogonum fasciculatum). New concrete pathways were laid to allow access to the front door and driveway, so the couple and their roommate, Mike Jimenez, can reach their cars.

Working with Deamer's original layout, the couple enjoyed adding more plants as the seasons changed, being careful to install the less drought-resistant varieties safely under the canopy of the elm tree. In spring, the garden's ceanothus, salvia and California honeysuckle add vibrant color to the garden's silvery color palette.

To receive the turf removal rebate, the sprinkler system was exchanged for a drip irrigation system, and a 650-gallon rain barrel, which runs to the permeable riverbed for groundwater capture, was added to the front of the house.

The couple says they now water the plants in the front yard twice a week, and the irrigation system has helped to bring the elm tree back to life. "The elm tree is so happy now," Covarrubias says. "It was sick and plagued by beetles. An arborist told us the water from the sprinklers was making the tree sick. I let it overgrow to the point where it dips down, and it feels like a treehouse inside the house."

Covarrubias says working in the garden became a way for her to process the loss of her father, her "best friend," who had been living with the couple before his death. "It gave me something to take care of that wasn't myself so I could focus on that when I was too far into grief to want to take care of myself," she says. Her father had always wanted her to put money into the house. Now, she honors his memory through planting the sweet-scented roses he cherished.

As someone who is chronically ill, Covarrubias often doesn't have the energy to work in the garden, but that doesn't stop her from experiencing the thriving ecosystem from inside the house. "On the days I couldn't go outside because my disease had flared up too much, I would look out of the window and pay attention to how much the birds and the insects were enjoying the garden," she says. "Its ever-changing landscape brought me peace because it meant that nothing stayed the same, not even this miserable illness."

After a rough few years, Covarrubias is still pulling out blades of Bermuda grass among the ceanothuses and sages, but she doesn't mind. Looking back, she appreciates what the garden has done for her and her mental health. "When things would get hard, I would go outside and sit in the garden and just be there with the plants and the birds," she says. "There was always something new to see or something that had grown from the previous day. Plants die and live. It's a never-ending cycle of time that helped me to see my life and the life of my father from the perspective of not a linear beginning or end but an eternal loop."

The garden has inspired Covarrubias to look beyond their property, and she hopes to add more native plants to their neighborhood. "The amount of joy I've gotten from my garden has inspired me to do more," she says. "Just walking down the street in my neighborhood, I realize there is so much neglected area in terms of green space. There are so many spaces that aren't being utilized because of public easements."

Clearly, Covarrubias' garden has become much more than a collection of plants.

As for her health, she added: "We're always taught that our bodies are the same, but good health is so fleeting and not the measure of our worth," she says. "My garden is worth more than one flower or season of blooms. Its daily existence is what gives it value. The birds and butterflies knew that before I did."