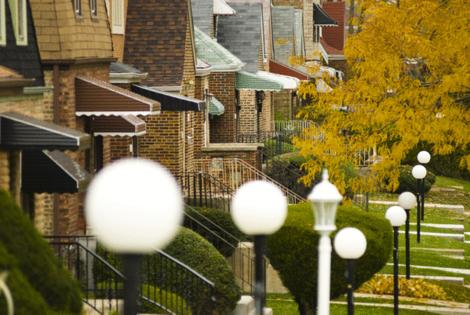 If the United States enters a recession and housing prices stagnate or fall, homeowners in parts of California, Delaware, Illinois, Indiana and New Jersey are most at risk of owing more than their houses are worth or losing their homes to foreclosure, according to a new analysis.

ATTOM, a real estate data company, identified the most at-risk counties based on affordability, foreclosure filings, unemployment levels and the share of homes with mortgage balances exceeding property values. On average, counties where Black and Hispanic residents are the largest group were judged to be at least twice as vulnerable to housing market declines as counties where White residents are the largest group, according to a Stateline analysis of census and ATTOM data.

The Federal Reserve’s effort to curb inflation by raising interest rates is expected to cool the red-hot housing market—but not immediately. For now, there is still strong demand for the limited supply of houses and apartments, and unemployment remains low. Most experts expect housing prices to continue to rise this year.

Home prices increased a record 21% in the past year, the largest increase in 30 years, and rents rose 12% nationally, according to the report. Rents were up by as much as 20% in some East Coast areas where prices had moderated earlier in the pandemic, according to a June study released by the Harvard Joint Center for Housing Studies.

But with some analysts predicting a recession, homeowners who have gotten used to fast-rising home values and growing home equity might be in for a shock.

The most at-risk market, according to the ATTOM rankings, is Passaic County, New Jersey, home to Paterson. It takes nearly half the median annual income of about $64,000 to maintain a mortgage on the typical $415,000 home there. Experts recommend spending no more than 30% of income on housing.

Paterson has drawn new interest from investors looking to capitalize on the city’s proximity to Manhattan, New York, about 20 miles away. The entry of investors into a market can raise home prices and rents, pricing out longtime residents with lower incomes.

Passaic County is 43% Hispanic and 13% Black, and many residents with low incomes stitch together a variety of part-time jobs to get by with wages of about $14 an hour, said Debbie Nicholson, a housing counselor at the nonprofit Paterson Task Force for Community Action in Passaic County.

ATTOM also identified six other New Jersey counties, seven in Illinois, two in Delaware and one each in California, Indiana, North Carolina and Texas among the 20 counties most vulnerable to a downturn.

The disproportionate at-risk status of Black and Hispanic counties is particularly troubling since households of color made up most of the growth in homeownership in recent years, according to the Harvard report.

Needing places to either work from temporarily or vacation as they escaped pandemic restrictions, COVID fleers made South Florida one of their top destinations.

And with them came an increased need for short-term housing,...Read More

Q: My neighbor and I had a falling out, after which he set up a bright flood light that points directly into my home. I cannot keep the blinds open on an entire side of my house. He also harassed me in other ways, such as ...Read More

One year ago, after working for more than a decade ...Read More