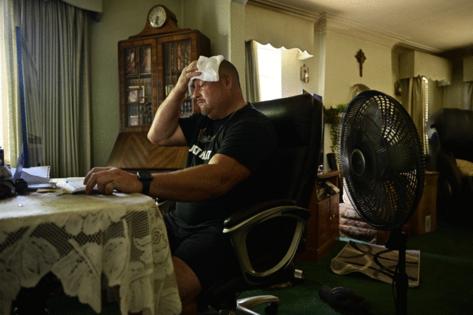 Anthony Yelenick wakes every summer morning in a puddle of his own sweat.

The pillows are moist. His pajamas are drenched. The sheets are soaked.

At night, the 43-year-old glides a wet washcloth over his body, flips a fan on and flops into bed sans blankets, hoping the cool air hitting his damp skin will bring him enough comfort to drift into a stifling sleep.

Yelenick, who lives in the home his grandfather built in Globeville in 1937, is among the Coloradans without air conditioning. He said the summers have always been warm, but he’s noticed the heat getting worse each year.

“It is so darn hot,” he said. “We keep the windows open all the time, but then you have the air pollution in this neighborhood, too. I had asthma when I was a kid living here, and now that I’ve moved back here again, it’s coming back. I’m wheezing again.”

As Colorado’s climate continues to warm, how long before attitudes around air conditioning shift from it being a nice perk to an absolute necessity?

Without imminent action, the state risks a public health crisis, said Paul Chinowsky, the director of the environmental design program at the University of Colorado Boulder.

“If you don’t have air conditioning, and it’s 90 degrees, you’re going to open your windows and doors,” said Chinowsky, who has studied infrastructure planning as it relates to climate change. “Your choice is very stark — either being too hot in the house or breathing unhealthy air. Which part of my health am I going to endanger first? And that’s only going to get worse.”

Roughly 40% of residences in metro Denver have central air conditioning, according to Chinowsky, who cited assessor data. In lower-income areas, he said that number drops to about 20% of residences.

Strictly looking at Denver, the city estimates about 30% of all homes lack central air conditioning, according to a 2021 city-issued report on renewable heating and cooling.