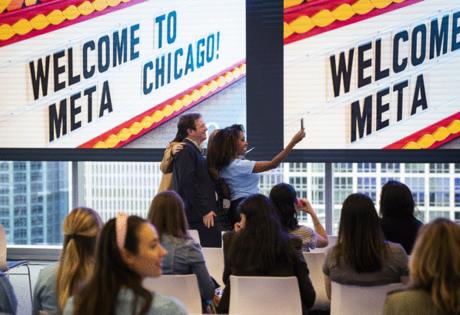 When Meta, the social media giant formerly known as Facebook, hosted the grand opening for its headquarters in Chicago's Fulton Market district last week, it was a celebration delayed more than two years by the pandemic.

Despite welcoming hundreds of cheering employees with free pie, confetti bursts and a rousing performance by the Chicago Bucket Boys, the celebration, which also marked Meta’s 15th anniversary in Chicago, was muted by a hybrid return to office that could make the expansive new workplace a monument to the past.

“We’d love to see people in the office two to three times a week,” said Judy Toland, 50, who heads up the Meta Chicago office. “But that is an option, that is not a mandate.”

Companies across Chicago are beginning to herd employees back into the office, but after two years of remote working and the lingering COVID-19 pandemic, it is a tentative process at best. Employees used to the flexibility of remote working are balking at a mandatory return, while hybrid work schedules turn the once busy office into a fortress of solitude.

Meta Chicago, which grew from a suburban basement operation in 2007 to become the largest Midwest outpost of the Menlo Park, California-based company, has about 500 employees, most of whom are salespeople, along with technology, finance, recruitment and other positions, Toland said. The new office was designed to handle many more employees on a daily basis.

In 2018, the company leased 263,000 square feet of the 35-story tower at 151 N. Franklin St., which had just been completed. Facebook said at the time that the space, which covers 11 floors and nearly a third of the building, would enable an expanded presence and increased hiring in Chicago.

Facebook was planning to move out of its 100,000-square-foot office at 191 N. Wacker Drive in March 2020. Then the COVID-19 pandemic hit, and employees were sent home instead of to the new office. After 18 months of remote working, the Chicago office ventured a soft opening in August 2021, but the rise of the delta variant pushed the return back to January — just in time for omicron to delay plans again.

The company, which changed its name to Meta in October to reflect plans to expand its social media platforms into the metaverse — an immersive virtual reality experience — finally began to filter into its new Chicago office during the first quarter of 2022.

“We’re really almost at a critical mass of people back in the office,” said Toland. “We’re allowing people to progress to return to office in a fashion that is a little bit more gradual.”

But plenty of wide-open spaces remain at Meta’s Chicago office, which could accommodate 1,000 or more full-time employees. It is far from alone, as Chicago companies struggle to determine how much office space is enough in the post-pandemic world.