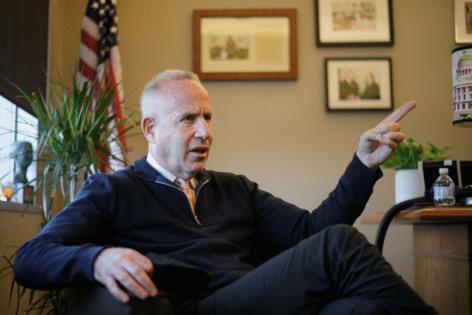 Mayor Darrell Steinberg is pushing a “right to housing” ordinance in Sacramento that he hopes will spark similar measures throughout California. The first-of-its-kind proposal would require Sacramento, which has committed to spending $100 million on homelessness over the next two years, to offer every homeless resident a housing placement. Alternatively, since affordable housing is so hard to come by, the city could offer them a bed in a homeless shelter, tiny home, sanctioned tent encampment or other temporary facility — as long as it comes with a long-term path to permanent housing. People who fall through the cracks could sue the city.

Steinberg also wants to require people to accept shelter. Once someone has been offered two different types, the city would be able to clear their encampment and force them to move. Details on how this would be enforced are murky, but Steinberg insists it wouldn’t involve police.

Steinberg sat down with this news organization to discuss the policy, which has yet to undergo a full City Council vote, and the impact it could have throughout the state. This interview has been edited for length and clarity.

Q: Your proposal is unprecedented both in California and in the nation, and has stirred up quite the debate. Why is this move necessary?

A: The law matters. The law sends important signals to both public and private stakeholders about what’s important, and about how we should act to address the problem. And right now the law says that everything we do around housing and building more housing and/or building more shelter is voluntary and optional.

And I fundamentally believe that if we had a legal requirement for all of us at all levels of government to produce more, we would. The best analogy to me is public education. It’s so obvious, frankly, that we don’t even think about it. But we require a free public education for children and require our school districts, our state, our communities to build enough schools to be able to provide that free public education to young people. That’s a given because it’s a fundamental right. Well, housing is a life essential. It’s life and death.

Q: Do you expect this idea to catch on and expand? On one hand, Los Angeles lawmakers are considering a similar proposal. But on the other, Gov. Gavin Newsom vetoed a statewide right to housing with AB 2405 in 2020, signaling maybe we aren’t quite ready for that approach.

A: I’ve been doing this a long time, and important ideas take some time to have their day. And I think we’re getting there. We may or may not be there yet. But I think we’re getting there because people are frustrated. And we have to respond to the public cry not in an irrational way or not in a way that is reactionary, but in a way that actually sets a course that gives the public the confidence that with all this new money, we’re actually going to achieve a greater result.

Q: Experts agree the vast majority of unhoused people want shelter or housing. But many won’t accept the specific options they’re offered because it forces them to leave behind pets and large belongings or vehicles, or separate from partners and children. How would your plan address that?

Money management, according to billionaire hedge-fund managers and other high-paid practitioners, is a complex science and art. But does it really have to be?

Early tax filers will get a chance now to e-file their 2021 tax returns as soon as Jan. 24.

The Internal Revenue Service announced Monday that it will begin accepting and processing tax returns in two weeks.