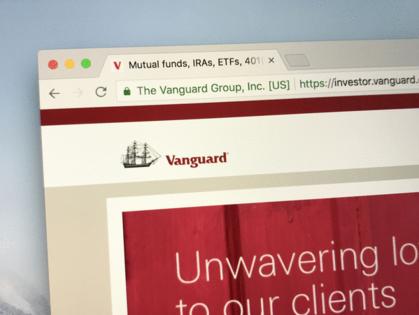 In a departure, Vanguard plans to launch an actively managed single-country China mutual fund in 2022, and chose Wellington Management and Baillie Gifford as the portfolio managers, citing a "track record of outperformance in Chinese equity markets."

The $8.3 trillion fund giant is launching a U.S.-listed China mutual fund, despite Vanguard scrapping its local business in China itself.

Last week, some Chinese companies such as ride-sharing firm Didi dropped plans to list in the U.S., prompting a brutal sell-off in other Chinese companies. A Chinese government crackdown on the technology sector has wiped out roughly $1 trillion of shareholder value this year.

Vanguard in November filed an initial registration statement with the U.S. Securities and Exchange Commission to launch Vanguard China Select Stock Fund in the first quarter of 2022. The fund will invest in both onshore and offshore Chinese stocks and U.S.-listed companies.

"Vanguard research indicates that there is an opportunity for talented active managers to generate alpha in China's large, but inefficient, equity market," Kaitlyn Caughlin, head of Vanguard portfolio review department, said in a statement.

China is an "important part of both the equity and fixed income allocations of a globally diversified portfolio," the firm said, as the world's second-largest nation by GDP output and the third-largest by stock market capitalization.

And the higher fee makes clear this isn't a classic Vanguard low-cost index fund, though it is cheaper than competitors. The China Select Stock Fund's benchmark is the MSCI China All Shares Index and carries an estimated expense ratio of 0.83% for Investor shares and 0.73% for Admiral shares, compared with an average expense ratio of 1.14% for competing funds, Vanguard said.

China's leader, Xi Jinping, has shaken investors worldwide this year with a pointed campaign to assert state control over the economy. The government has fined big tech companies like Alibaba, the e-commerce titan, and the food-delivery giant Meituan for antitrust violations.

Vanguard took pains to spell out the risks, as this isn't an index fund: "While the fund may offer ... diversification benefits, the single-country focus may expose investors to more acute investment, geopolitical, and regulatory risks. The fund's country-specific concentration may drive ... greater volatility relative to the broad market and therefore should be thoughtfully integrated into a globally diversified portfolio."

China fund a change for Vanguard

Q: I cosigned a home loan for my son. Will my wife or other heirs be responsible for the debt if he defaults after my death? —Carl

A: Last week, we discussed that a home loan is split into two parts, the promissory note...Read More

On a recent Saturday afternoon, real estate agent Bonnie Heatzig was escorting her clients, visiting from Washington, D.C., on a tour of luxury properties in Boca Raton.

But instead of stepping into her car for the start ...Read More

TALLAHASSEE — As rents skyrocket, startup companies are touting what they consider to be a helpful solution to hefty security deposits pricing Floridians out of apartments.

Instead of forking over an upfront security ...Read More

Depressed housing inventory curbed U.S. sales of previously owned homes at the end of the strongest year since 2006, and a recent spike in mortgage rates risks a further tempering of purchases.