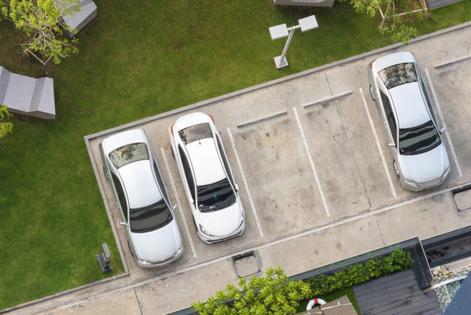 In some regions, like Southern California, nearly all houses, townhomes and apartments come with at least one space, and often multiple spaces. Each spot costs approximately $30,000 to build in a typical parking structure, says CJ Gabbe, associate professor of environmental studies at Santa Clara University, and as much as $50,000 for underground spots — which is only construction costs, not land prices.

A recent study of Santa Clara County, California, found that 13% of its land area was devoted to parking, along with roughly half of commercial land. Who pays for all that parking? If you don’t follow the advice in this article, you do. The Santa Clara average price per square foot for condos, by the way, exceeds $700.

To avoid paying for parking, first you need to understand why parking is so pricey. Typical city parking spot policies for real estate developers are as old as your grandparents. Most municipalities insist that developers build two parking spots for every new home or apartment. Retail and office building parking requirements are similarly hefty, often requiring that parking lots accommodate vehicles on the busiest days of the year, such as holiday shopping. Many of these policies have remained generally consistent for a half century.

You already pay dearly for that parking, whether or not you drive. In densely populated or sought-after zip codes, all the parking space means that fewer people can live there, which in turn drives up the cost of renting and buying. Driveways, garages and spots are also included in property valuations, and thus taxed.

But renters pay a particularly steep cost. A study co-authored by Gabbe found that a typical metro parking spot in an apartment building costs renters roughly $2,000 per year (in 2021 dollars) — and even more in high-rent regions. Over a lifetime, that’s easily well over $100,000. “It’s a cost that’s implicitly paid every month by households, whether they have a car or not,” Gabbe says. The people shouldering these costs unnecessarily are also often carless, low-income households. The same study found that roughly 7% of rental households with a parking garage space did not have a car. Perhaps they would rather have an extra $100 each month to spend on something else?

If you’ve been considering going without a car, it’s good to know some cities have made all or parts of their transit systems free. Even when public transit is not free, it’s often a lot cheaper than a car payment and parking.

Gabbe has a few suggestions on how to avoid paying for parking you don’t need:

—Look for buildings without parking spots. If there aren’t any parking spots, you’re not paying for ‘em. “Older pre-war housing tends to have little or no parking,” Gabbe says. The same is true for some very new housing in regions with recent policy reforms.

—Stick to transit-accessible locations. You’re most likely to find housing that does not come with parking, as well as more options for getting around without a car.

Ask the landlord to do à la carte parking. If your unit comes with a parking spot, see if your landlord will lower the rent if you don’t take the parking spot. (City regulations on this vary.) This is the model of the future — home rent is home rent, and parking rent is parking rent.

—Rent out your parking spot. If you don’t have a car, capitalize on that spot. In some cities, like New York, secondary markets for parking spots are booming. Some buildings restrict renting out spots to non-residents, of course.

You also can’t go wrong with moving to municipalities that have reformed their requirements for off-street parking. Though that sounds like a traffic jam waiting to happen, Gabbe says no. Developers often build some spots even when not required, and nearly all U.S. neighborhoods already include plenty of spots. “Because it takes a long time for new low-parking development to come online, most places will have ample parking for decades,” he says.

There is no shortage of retirement planning tips and strategies that, on face value, make great sense. But all too often the advice is incomplete, the suggested implementation is flawed, or the strategy is based on a risky...Read More

If you have stopped working by age 65, or you are working for a firm that has fewer than 20 employees, you need to sign up for Medicare coverage right around your 65th birthday. There are two mandatory pieces you will sign...Read More

The winter holidays are right around the corner. Soon, many Americans will gather around the dinner table with family and friends to give thanks for abundant blessings and freedoms as they indulge in a cornucopia of ...Read More