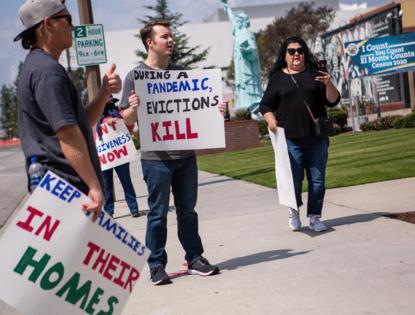 State and local governments picked up the pace of distributing emergency rental assistance funds in September amid a push from the Biden administration to accelerate payments to households.

A program record of $2.8 billion was released last month, bringing the total to $10.7 billion, out of the $46.5 billion appropriated by Congress to prevent evictions amid the Covid-19 pandemic, the U.S. Treasury Department said Monday. The total covers more than 2 million payments.

The pace of rental aid distribution has accelerated in the last two months under a concerted push from the federal government following a widely-reported slow start over the first half of this year. Still, some state and local governments are lagging, including 17 states that have expended less than 15% of allocated funds.

“The numbers here show a continued acceleration that this program has had a meaningful effect in preventing the level of feared evictions, post the moratorium,” Gene Sperling, the administration’s coordinator for pandemic relief programs, said on a call with reporters. “But there are still painful gaps.”

As required by the law, the Treasury Department will soon begin to reclaim excess funds from state and local governments who have allocations that exceed their needs or administrative capacity and reallocate them to other areas with demonstrated need.

State and local governments that have already substantially expended funds from the first round of assistance are also eligible for more funding in the second wave of rental assistance approved under the American Rescue Plan.