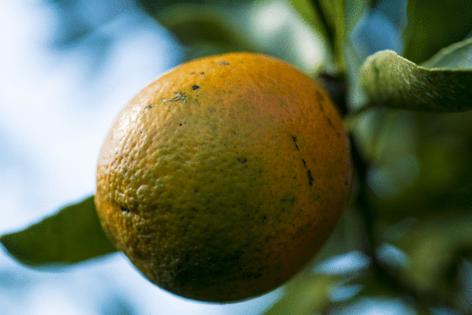 FORT LAUDERDALE, Fla. — Floridians still shudder at the memory. The knock on the door. The warnings to cooperate or be arrested. Then chain-saw crews destroying prized lemon and orange trees in an effort to wipe out citrus canker.

And all for nothing. Despite the loss of almost 900,000 trees in residential areas, the state’s eradication program failed and was abandoned in 2006. But the bitterness lingers and the scars run deep.

Despite the trauma of years past, there is a flicker of hope among researchers that any remaining citrus trees could be preserved. And, perhaps more exciting, University of Florida scientists have created a tree that they hope will be resistant to disease.

But it will be a while before you can pluck fresh citrus in your backyard. The days of plant it and forget it have gone. And no one is sure how to get the new tree to the market — or whether there is even any demand.

Problem number one: Gardeners are now fighting a disease called citrus greening, caused by a predator called Asian citrus psyllids. “It attacks the tree from the inside out,” said Ruth Hohl Borger, a spokeswoman at the University of Florida’s Institute of Food and Agricultural Sciences, Citrus Research and Education Center in Lake Alfred, near Orlando. “And there is no cure.”

Problem number two: For some local nurseries, selling citrus became too much of a hassle once greening became a widespread nuisance. There aren’t orange trees or lemon trees being sold at The Tropic Plants in Tamarac, even though they were popular items when the store first opened off University Drive 30 years ago.

“Customers don’t want to maintain them, I know that sounds awful, but it’s true,” said owner Theresa Costanzo. “They want a refund or [ask] ‘Why isn’t this tree doing well?’”

The days of planting citrus and simply letting the tree do its thing are long over: “It’s not like not that anymore,” Costanza said.

The Florida Department of Agriculture had an ambitious program to counter citrus canker, an infectious disease that was damaging one of the most important industries in the state. Armed with search warrants, it snuffed out healthy trees that were within 1,900 feet of infected trees to try to quash the disease.

A fruit infected with canker — marked with lesions on the leaves and stems — is safe to eat, but too ugly to even try.

Myrna Godfrey, of Boca Raton, had an orange tree and lemon tree taken off her property by force. Both trees were healthy, she says.

“They rang my door, I was furious,” Godfrey recalls. “He ripped it out and dug out the roots and said to me, ‘Listen to me, if you don’t allow me to do this, I will call the police and have them take you away.’

“It’s like you own a pet and someone wants to take your pet away.”

Eventually she replaced the downed trees with a new lemon tree, as well as mango and jackfruit, which she says are all “thriving.”

“There was no reason for them to remove it,” Godfrey still argues of her precious citrus trees. “It was stupid.”

Florida’s failed eradication campaign lasted from the late 1990s through 2005. The program ended in 2006 when the U.S. Department of Agricultural said the hurricanes of 2004 and 2005 had spread the disease beyond the possibility of eradicating it.

But the problems weren’t gone, and Florida saw some overlap with canker when greening first discovered in the Sunshine State in 2005. But it might have been around much longer, experts say.

Greening is worse than canker, experts say, because it kills the tree. So the UF research group has two plans of attack.

It will soon be starting an education campaign to teach people how to care for citrus to prevent greening, or “how to have a growing strategy,” said Borger. “You can’t just put a tree in the ground and expect it to grow.”

She wants people to learn how to use nutrition-based fertilizer, and cover a tree for the first two years, like the way parents swaddle a newborn baby.

The second prong of the offensive is a new tree. In 2010, Fred Gmitter, Jr., a professor of citrus breeding and genetics, used Honeybell tangelos and a Spanish Clementine to create a Sugar Belle tree that grows a variety of oranges. He calls it a mandarin hybrid. It looks like a tangelo but taste like something new. “It has a unique aroma, a lot of fragrance, it’s sweet and has a good punch,” he said.

The fruit is ready to pick in November and the fruit can keep growing till March. “In your yard it just keeps going,” he said. “It’s just like candy.”

UF scientists believe this tree will be tolerant of greening. “The tree grows faster than the disease can take it down,” Gmitter said. “It produces good quality fruit.”

But a decade later they have still not perfected how to get the tree to market. Because few people know about it, there’s no public demand. Will growers ever take the risk when they already operate “on such slim margins,” they wonder.

With greening such a problem, they have considered giving the Sugar Belle away to influential master gardeners around the state to get people interested, and create the interest. But there are no such plans yet.

And there are more fruit trees in the works of development, all of whom could be greening-resistant, said Michael E. Rogers, the director of the UF/IFAS Citrus Research & Education Center. Varieties of oranges, mandarins, limes, lemons and grapefruit are being bred by his staff.

“We’re probably going to have a number of selections of this type of citrus over the next several years; they will slowly make their way into the nurseries,” he said. “The ones we’re turning out now are far superior in quality” including a “new red” in grapefruits “that are fantastic. The quality is better, and it’s more tolerant of the disease.”

The struggle until now is “we’ve not been able to give recommendations to homeowners how to care for the tree because if you plant a single tree in the backyard, it’s going to become infected with the disease ... Why spend $50, $100 or more on a tree and lose it.”

Rogers said his staff will be starting an educational campaign in the next couple months to reach around the state to get information to the public about proper fertilization techniques.

“We want you to grow citrus, but with knowledge,” said UF’s Borger.