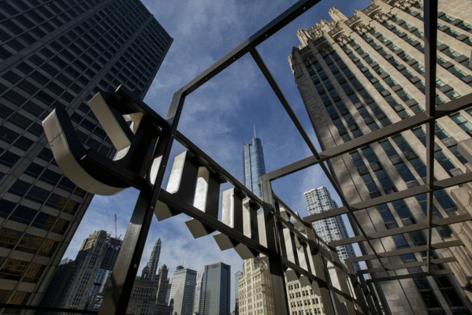 The CIM Group and Golub & Co., who together bought the property from Tribune Media for $240 million in 2016, allowed walk-throughs of the iconic building Wednesday — showing how the renderings of Tribune Tower Residences reached fruition.

A 75-foot indoor lap pool on the seventh floor (south wing), with a sun deck and terrace beneath the Chicago Tribune sign, adjacent to an outdoor and grilling area? Check.

A luxury suite of spa features, full fitness center by The Wright Fit, and indoor golf simulator on the second floor? Check.

A third-floor gathering space for residents that overlooks Nathan Hale Court in the front and offers a ⅓-acre private park in the back? Check. Catering kitchen, lounging, gaming, and dining areas sit on one side of the floor, while conference/meeting rooms and workspaces overlook Pioneer Court. The amenities of the third floor are enhanced with the addition of Robert R. McCormick’s historic 24th-floor fireplace, refurbished and reinstalled. It once belonged to Col. McCormick, former owner and publisher of the Chicago Tribune.

Lounge area amid the neo-Gothic spires on the 25th floor with 360-degree views of the city, complete with fire pits, outdoor grilling, chef’s kitchen and herb garden? Check.

“All these potted plants are actually herbs, so instead of going to Whole Foods or Trader Joe’s to get your rosemary, just come to floor 25,” said Shannon Gibson-Giampa , Tribune Tower Residences sales consultant.

One just has to be an owner to enjoy the luxury interiors and historic environs.

“Buy a condo or become friends with someone in the building,” Gibson-Giampa, said.

Gibson-Giampa said those buying residences in the redeveloped Tribune Tower have 56 floor plans to choose from, including Wolf appliances, custom cabinetry, kitchen galley workstations and marble bathrooms. The Tower Residences has a private dog park and space for retail on the first floor. What used to be the cafeteria space that nourished journalists through the years is now a posh lobby of grays, whites, blacks and silver and gold that takes one from the new lobby on Illinois Street in the north wing of the building to the more historic lobby on Michigan Avenue. The cacophony of footsteps and voices in the historic lobby has been exchanged for a quieter environment since the building was renovated from newsgathering operations to one-to four-bedroom residences for sale from $900,000 to over $8 million.

When asked whether new Chicago transplants or current Chicagoans were purchasing the approximately 436,000 square feet of residential space, she said a little bit of both.

“Chicago named the best city five years in a row, people like that,” Gibson-Giampa said. “I love it when people come from New York and L.A., the value they can get in Chicago. And it’s such a clean city compared to those and so easy to get around too. People recognize that.”