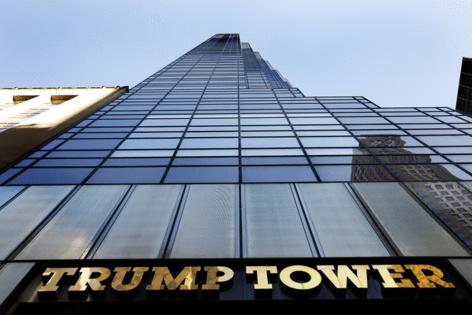 The Trump Organization is far from alone in facing real estate challenges. The pandemic has battered Manhattan, sending office and retail vacancy rates soaring and weighing on asking rents.

Marc Fisher, whose showroom occupied the 21st floor of Trump Tower, “vacated prior to lease end,” the Well Fargo said in the note, adding that the Trump Organization is trying to find a replacement. In March, Trump’s company sued the footwear maker, which used to partner with Ivanka Trump’s now-defunct fashion line, for more than $1 million in unpaid back rent. It later dropped the lawsuit, according to court records.

Fisher’s space was 10.8% of the gross leasable area of Trump Tower, whose largest current tenants are the Trump Organization itself, Gucci America Inc. and ICC Industries, according to the information compiled by Wells Fargo. Trump is current on payments for the $100 million mortgage.

The loan, which matures next year, is just one piece of the more than $590 million of debt held by the Trump Organization that comes due within the next four years. More than half of that is personally guaranteed by Trump.

One of Trump’s favored lenders, Deutsche Bank AG, cut ties with him after the riot at the U.S. Capitol earlier this year. Among the outstanding loans Trump has with the bank is $125 million for his Doral, Florida, golf resort that matures in 2023.

There is also more than $150 million in debt tied to the Old Post Office building in Washington, D.C., which now houses a Trump International Hotel. The Trump Organization has been looking for a buyer for that property, where the debt matures in 2024.

The Trump Organization got a boost earlier this year when a partner in one of its most valuable assets, Vornado Realty Trust, refinanced debt on an office tower in San Francisco. Trump holds a 30% stake in the property and the deal generated a $617 million cash-out for its owners.

“We are one of the most under-leveraged real estate companies in the country relative to our assets,” Eric Trump said at the time of the Vornado bond sales in April.