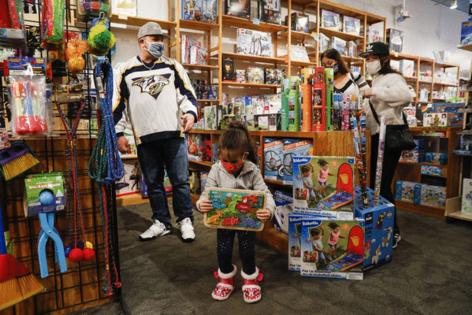 Store shelves during the holiday shopping season — and yes, we're talking about Hanukkah and Christmas just days after Labor Day — could prove to be merry but ever so tight.

An inventory squeeze could frustrate shoppers, as 82% of retail executives surveyed are somewhat or very concerned about inventory shortages, according to a new survey by KPMG.

And 55% surveyed plan to set up alternate suppliers.

"I can't remember a time when the concern about inventory was that significant," said Scott Rankin, national advisory leader for the consumer and retail team for the KPMG US Advisory practice in Boston.

Last year, Rankin told me, many retailers feared being stuck with too many clothes and other gift items as consumers planned smaller family gatherings and limited their trips to the malls in light of the coronavirus pandemic.

Even so, consumers shifted into high gear in December and the National Retail Federation ended up reporting in January that retail sales during 2020's November-December holiday season grew an unexpectedly high 8.3% over the same period in 2019 to $789.4 billion, exceeding the National Retail Federation's holiday forecast despite the economic challenges of the pandemic.

How will Santa's stockroom look?

This year, retailers are voicing early concerns about how they're going to stock shelves as they combat truck driver shortages, supply chain disruptions, congestion at the ports and the shortage of shipping containers.

Some toy makers are sounding the alarm and warning consumers about the possibility of empty spots on shelves during parts of the season. MGA Entertainment CEO Isaac Larian, whose company owns LOL Surprise! and Rainbow High dolls, told CNN Business: "There is going to be a major shortage of toy products this year."