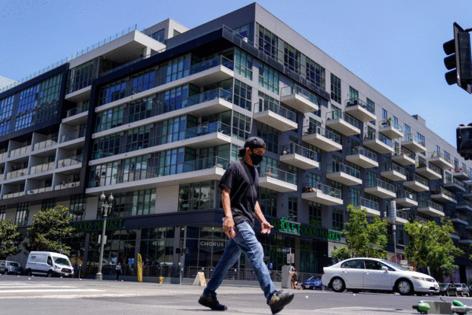 After falling through much of the COVID-19 crisis as people relocated to suburbs or moved in with relatives, rents in big cities including Los Angeles, San Francisco and New York are now on the rise. And experts say that prices are likely to keep swinging upward.

"Landlords are really eager to charge more rather than charge less," said Rob Warnock, research associate with rental website Apartment List, whose data show the median rent in Los Angeles is up 3.6% from the bottom. He said he expects the rise to continue, taking until the end of summer for prices in the city to hit February 2020 — or pre-pandemic — levels.

In Los Angeles, the median rent for a vacant apartment hit a low of $1,717 in January and has risen ever since, according to data from Apartment List. Other data sources also show a steady increase since the beginning of the year, which analysts attributed to job growth and returning demand for city life as the pandemic ebbs and the economy reopens.

Rents fell last year as people moved out of apartments in big cities, because they wanted more space and bought a house or because they lost their jobs and decided to move in with family. At the same time, the typical inflow of people coming for new jobs and college fell. Landlords said they were forced to cut rents to fill an increasing number of vacant apartments.

In Los Angeles County, rents fell most on the high end of the market but declined somewhat on the lower end, in typically older, more run-down buildings, according to several data sources.

How much and how fast?

As of Monday, the apartment vacancy rate in Los Angeles County had declined to 5.8% after hitting a high of 6.2% in November, according to real estate data provider CoStar.

Chuck Eberly, who manages roughly 3,000 apartments in the L.A. area, sees the fresh demand firsthand. He said that vacancies are dropping throughout Eberly Co.'s portfolio and that rents are up 5% to 10% from the pandemic bottom.