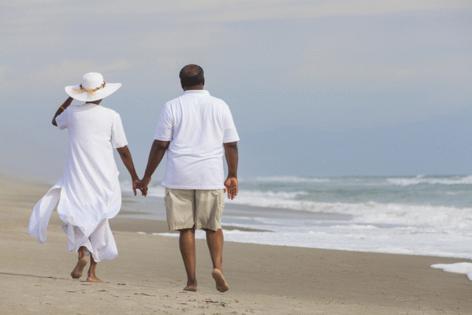 After a year of human deprivation, no travel and endless Zoom calls, it’s no wonder many baby boomers are thinking of taking an early retirement to make the most of the time they have left. Data from Pew Research Center estimates 3.2 million more people retired last year than the year before. A survey from the New York Fed also indicates Americans are looking to leave the labor force earlier than they’d previously planned.

But wait. In fact, you may not have as much money as you think you do because your account balance isn’t the only number you need to worry about. If you’re not taking these other factors into consideration, retiring early could be one of the biggest financial mistakes you’ll ever make.

First of all, you need to account for risk. People nearing retirement typically have about 40% of their retirement savings in the stock market. That’s great when the market rises, but you’ll lose more when it falls. Odds are the stock market will have a significant decline at some point during the 20 or 30 years you are retired — maybe more than once.

Second you have to spend money in retirement. If you have a special number in mind for your golden years, it should be how much you’ll be able to spend each year. And financing that spending brings many new risks into the picture.

For starters, consider health care expenses such as Medicare premiums, long term care and prescription co-pays. A recent report estimates that a couple can expect to spend more than $200,000 in health expenses in retirement! And keep in mind there’s lots of variability around this estimate. Some people need much less, some much more; a couple will need more than $300,000 if they want to ensure they can pay all their health expenses.

Meanwhile, in 2019 the median household of 60 to 65 year-old savers only had $250,000 in total financial assets. You might have encountered a guideline that you can spend 4% of your savings each year. But really the amount you can spend is dependent on interest rates and inflation, and at the current low rates that protect you from inflation, which have even dipped negative, your money doesn’t go as far.

You need to worry about the prospect of rising inflation because, unlike people still in the labor force, you’ll be on a fixed income. Inflation risk is rising, but you can account for it by putting a value on your future spending using inflation-indexed bonds.

There are few hard and fast rules when it comes to retirement finance, but one is this: if you want to see how much you can spend each year, divide your wealth by 32. That’s the current annuity factor, a number based on inflation-adjusted interest rates that helps you figure out how much $1 of spending will cost over a prospective 30 years of retirement.

Real interest rates, which protect you from inflation, have fallen in recent years, making it more expensive to finance future spending — at today’s negative rates, ensuring you have $1 to spend in 30 years costs $1.01 today. That change in real interest rates has also driven up the annuity factor by 13% since January 2020.

If I’ve just shattered your early retirement dreams, I’ve got a little good news. You have some control over your Social Security income. Delaying payments until you're older could increase your monthly check substantially without the risks of the stock market. So, for example, if you earned the average income for most of your career, you’d get $14,800 a year (inflation adjusted) starting at age 63. But if you wait until you're 67, you’d get $21,000 (in today’s dollars). That's a 42% increase in four years and far more than you’d probably get in a volatile market!

And if that new spending number you now have in mind isn't what you hoped, you may have more work options to bolster your finances. In a post-pandemic world, employers might be more willing to accommodate semi-retirement, where you work fewer days for less income while retaining health benefits until you’re eligible for Medicare at 65. And perhaps your employer would be willing to continue the part-time arrangement after Medicare kicks in. That would make for a much more secure retirement and save you from the potentially costly mistake of retiring too early.