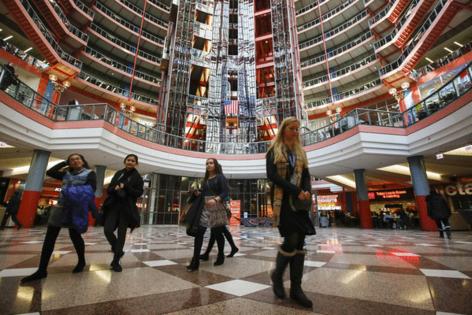 As the architecture world mourns Helmut Jahn’s death from a cycling accident Saturday in the western suburbs, the next few months are likely to go a long way toward determining the fate of the 81-year-old’s most controversial building and his tallest one in Chicago.

Jahn’s namesake firm and preservation groups continue working to spare the glassy, spaceshiplike James R. Thompson Center, known for its spectacular 17-story atrium, from the wrecking ball after the state of Illinois recently put the Loop property on the market for sale.

Meanwhile, developers are reworking plans to build what would be Jahn’s tallest building in Chicago, a more than 800-foot-tall residential tower on South Michigan Avenue. Construction of 1000M was halted early in the COVID-19 pandemic, just a few months after holding a groundbreaking ceremony and starting work on the foundation.

Jahn leaves behind a list of significant designs throughout the world, including United Airlines Terminal 1 in O’Hare International Airport and the Messeturm in Frankfurt, Germany, which was the tallest building in Europe when it was built in the 1980s.

Jahn’s death came less than a week after Gov. J.B. Pritzker formally put the 1.2 million-square-foot Thompson Center government building up for sale, after years of talk by state officials.

Less than two months ago, downtown Ald. Brendan Reilly, 42nd, proposed a zoning change that, if approved by the full City Council, would allow for one of the tallest skyscrapers in the city to be constructed on the site.

That would help the state maximize its return on a sale of the building, but the change also could move the Thompson Center closer to its long-speculated date with a wrecking ball.

Preservation groups have been working to prevent that from happening. Opponents argue that the building is inefficient and falling apart, making it obsolete for much of its 36-year lifetime. Jahn had criticized state leaders for neglecting the property, leading to its need for costly repairs.

“It makes the Thompson Center even more significant as this world-renowned architect based in Chicago will no longer be designing any new structures,” Ward Miller, executive director of Preservation Chicago, said Monday. “This defines his career. The Thompson Center along with the Sony Center in Berlin are magnificent examples of his work.”

Pritzker on Monday praised Jahn’s career while pointing out the Thompson Center’s shortcomings.