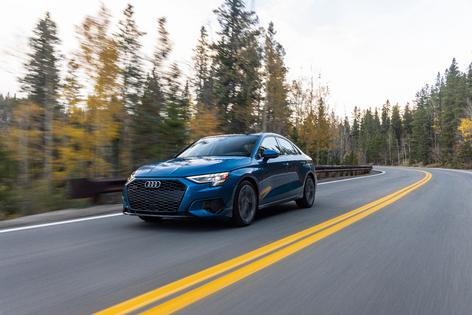 It's an interesting fact that while small sedans have largely disappeared from the general market, you can still find a number of them in the luxury car market -- including subcompact models like Audi's A3 sedan.

It's a really small car -- about the same size as a Hyundai Accent, which is pretty much the smallest sedan you can buy. This pint-size Audi is nearly as economical to drive as the Accent, too, rating 28 mpg in city driving and 38 mpg on the highway. (The Accent carries an EPA rating of 33 city, 41 highway.)

But the A3 isn't an economy car. It's an economical luxury car.

And that may account for people wanting to buy it.

The A3 is Audi's smallest sedan, and a much smaller sedan than non-luxury-brand compacts such as the Honda Civic sedan and the Toyota Corolla sedan, both of which are nearly a foot longer.

It's only 176.4 inches long -- just barely longer than a Hyundai Accent sedan, which is the smallest four-door sedan you can still buy that isn't a luxury-brand sedan.

It comes in two trims: Premium ($34,900) and Premium Plus ($38,500). Both trims come standard with a turbocharged 2.0-liter engine paired with a mild-hybrid system that cycles the engine off as often as possible (hence the economy car gas mileage) and a seven-speed automatic transmission.

Once upon a time, Chevy's Blazer was a full-size 4x4 -- this was before there were "SUVs" -- and it came standard with a V8 engine. It has since gotten smaller -- and it's now a crossover.

Similar to so many others.

The saying goes that you cannot eat your cake and have it, too. But what if you could?

Plug-in hybrids like the Jeep Grand Cherokee 4xe can be electric vehicles -- without the problems that beset electric ...Read More