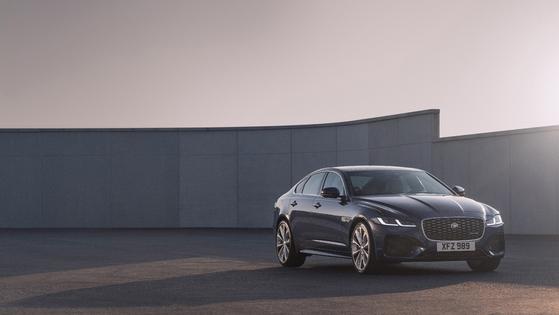 Jaguar -- the luxury brand known for its cars -- currently makes only two kinds of them. And only one of them is a sedan.

The rest are crossovers, which everyone else is known for making.

It makes one wonder why Jaguar decided to make them, too, as opposed to making more of what everyone else isn't making much anymore -- like the XF sedan.

The XF is a midsize luxury-sport sedan that competes with the handful of other such sedans still on the market, including the BMW 5 Series and Mercedes E-Class sedans. Like them, it is available in both rear-drive and all-wheel-drive versions.

Unlike either of them, it is only available with a four-cylinder engine. It also comes standard with a much smaller (just 10.5 cubic feet) trunk than they do.

Indeed, you can buy a top-of-the-line XF P300 R Dynamic -- which comes standard with a more powerful four-cylinder engine and standard AWD -- for $51,000 and still spend thousands less than what Mercedes and BMW are asking for the four-cylinder-powered (and less powerful) rear-wheel-drive versions of their luxury-sport sedans.

Small, economical cars may soon be in vogue again -- for the same reasons they used to be in vogue: Money's tight, and things cost more.

Thus, buying a car that doesn't use, or cost, much has appeal, ...Read More

The Nissan Leaf electric vehicle is now the least expensive EV available in the United States -- and the only EV that starts under $30,000. Everything else that's electrified has a base price well over $30,000.

There are two versions of the Wilderness edition of two Subaru models -- the Forester and the Outback.

Each are similar in that they both come standard with additional features that make them more capable of operating in ...Read More

The last of the V8 Interceptors -- from the "Mad Max" movies -- was a car. The real thing may be something like the Dodge Durango SUV -- especially the SRT 392 variant, which is equipped with the biggest V8 you can still ...Read More