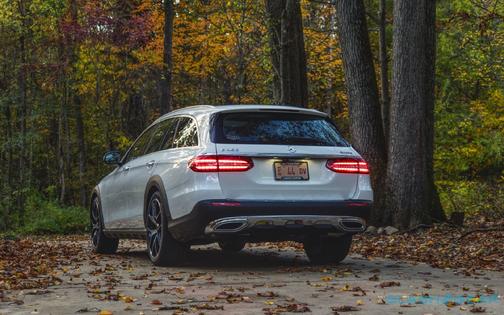 But now just about everyone has a crossover.

And that's why wagons like the Mercedes E450 are becoming fashionable again.

Plus, more ground clearance and some unique-to-this-model styling embellishments.

This is significantly higher than the asking price of the E-Sedan, which stickers for $54,950 to start. But then, the E450 comes with pretty much everything, to start with. And you can't get the E-Sedan with 64 cubic feet of cargo-carrying capacity, no matter how much you spend on it.

Or seats for seven.

The V8-powered AMG 63 version of the E is no longer available.

Something different, for a change.

Massaging seats are almost worth the $62,750, all by themselves.

Snow-day traction advantage of AWD is limited by not much ground clearance (5.8 inches).

The magnificent sound of the standard in-line six is overly muffled.

The E450 does not come standard with the 2.0-liter turbocharged four-cylinder engine that's standard in the E350 sedan. Instead, it comes standard with the 3.0-liter in-line six Mercedes introduced about two years ago as the successor to the V6 that was formerly available in several Benz models.

It makes 362 horsepower and 369 foot-pounds of torque, output comparable to that of a V8 but without the thirst of one. In fact, the six is hardly thirstier than the 2.0-liter (and 255 horsepower) turbocharged four that is standard in the E350 sedan.

A nine-speed automatic with driver-selectable modes is standard. Also, the previously mentioned 4MATIC all-wheel-drive system, which gives the wagon a traction advantage over its rear-wheel-drive (as it comes) sedan sibling.

Technically, the E450 is a hybrid, as the 3.0-liter six is augmented by a flywheel starter/generator that cycles the engine on and off, which is why it gets about the same gas mileage as the smaller, less powerful 2.0-liter four that's standard in the E350 sedan.

But you don't feel it. The high-powered 48-volt electrical system that powers the flywheel starter sees to that.

Mercedes put a lot of work into quieting the sounds of combustion, which is understandable in a luxury wagon. But this is an engine you might like to hear more from. This, incidentally, is why several $50,000-plus cars that have these fours also have sound augmenters, to make them sound like something else.

The wagon form is, by itself, an unexpected and interesting sight. The Benz stands out from the crowd and accommodates one, too -- in a way that's really interesting.

Open the rear liftgate and then lift up on the handles that you'd expect would be attached to under-floor storage cubbies. How about an extra set of seats? How about rear-facing jump seats?

Sure, the seats are small and aren't for adults -- unless they are small adults. But they fit kids just fine, and that's the whole point. This is a wagon that can carry two adults up front, three teens in back and two preteens in the way back.

The E450 also comes with unpainted/matte-black wheel arch protectors, which are there to help keep stone chips from scuffing the finish -- plus a pair of low-profile roof racks, in case you need more ways to carry things.

Mercedes does a top-shelf job of blending tech with function. The E wagon has the expected LCD flat panel main and secondary clusters. But there is also a simple, functional thumb wheel to adjust the sound level of the superb Burmester audio rig and, similarly, at-a-glance (and touch) controls for every-drive-necessary adjustments, such as the temperature and fan speed.

There is also still a 12-volt power point in addition to all the modern USB-type power points.

One thing this wagon doesn't have in common with the Vista Cruisers of the past is a family-friendly price tag.

In the Before Time, families could afford a seven-passenger wagon with a V8 engine. They were as common once as soft drinks with real sugar.

Of course, this is a Mercedes.

Still, this Mercedes would be more accessible if it cost a bit less, which it probably could if it were available with the smaller engine that's standard in the E sedan on which it's based -- and perhaps without some of the "everything" the wagon comes standard with, amenities-wise.

If you'd like to be driving something that not everyone else is driving -- and have more room for everyone -- here's a wagon that could be what you're looking for.

Eric's latest book, "Doomed: Good Cars Gone Wrong!" will be available soon. To find out more about Eric and read his past columns, please visit the Creators Syndicate webpage at www.creators.com.