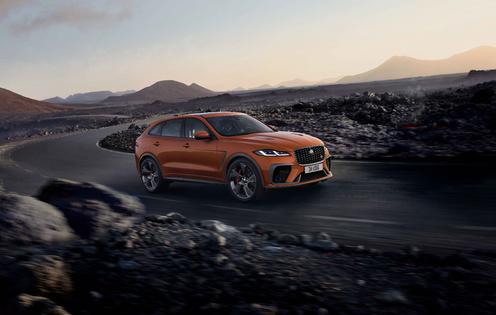 The chromed leaper on the hood, for instance, is more beautiful all by itself than the entirety of most other cars.

The trick is making practical beautiful.

The F-Pace looks like a medium-small, five-door crossover -- but it's actually a Jaguar under its skin.

Specifically, a Jaguar XF, with which the F-Pace shares the same D7 Premium Lightweight Architecture and underlying mechanicals. That means it shares the same rear-drive-based layout and turbo/supercharged engines -- with the option to get a V8 engine. And that's what makes it a Jaguar that happens to seat five -- and has enough room for all their stuff, too.

Prices start at $50,900 for the P250 trim, which has a turbocharged 2.0-liter engine, eight-speed automatic and a full-time AWD system. The $59,600 S340 adds a turbo-supercharged 3.0-liter in-line six, configurable drive modes and an adaptive suspension.

All trims now come standard with a power liftgate.

A Jaguar that happens to be a crossover.

Standard 11.4-inch touchscreen interface for the excellent Meridian audio system (and other features) isn't easy to use while driving.

Heated steering wheel isn't available in the base P250 trim.

Standard four uses about the same amount of gas as the much more powerful six.

The F-Pace offers three drivetrain options, beginning with the standard turbocharged 2.0-liter four-cylinder engine that makes 246 horsepower and 269 foot-pounds of torque (at 1,300 RPM).

This punchy little engine does an impressive job of moving the two-ton (4,015 pounds) cat to 60 in about 6.9 seconds. EPA says you should see 22 mpg in city driving and 27 on the highway.

Next up is an inline six that is both turbocharged, supercharged and (mildly) hybridized.

That gap is filled by an electrically driven supercharger that builds boost immediately.

The result is what feels like a very strong engine that isn't turbocharged -- and either 335 or 395 horsepower (and 354 or 406 foot-pounds of torque, respectively) depending on which version of this engine you select.

There's one more engine to consider.

It's the 5.0-liter V8 that powers the very high-performance F-Pace SVR. This engine has a mechanically driven supercharger, which is powered by the engine (like an alternator or power steering pump).

It may look like a crossover, but it doesn't drive like one. It drives like the rear-wheel-drive Jaguar sport sedan its crossover-shaped body was draped upon.

Put the F-Pace through some paces. Feel the way the rear wheels break traction -- just a little bit and just enough to be fun -- when you floor the thing from a stop at a T intersection and crank the wheel hard over. A FWD-based crossover will typically understeer skitter as it tries to recover its footing. The Jag oversteers -- just a touch -- and then the tail snaps back into line and off you go, a smile on your face that nothing FWD-based can induce.

This cat is balanced -- and that's the difference.

There are a few others that emulate the driving experience -- the Porsche Macan, for instance. But Jaguar pulls another cat out of the bag by making the F-Pace a more practical experience.

It can tow 5,291 pounds, for instance -- almost as much as some trucks and considerably more than the Porsche's 4,409 pounds. It also has not far from twice the space behind its back seats -- 31.5 cubic feet with them in place versus just 17.2 for the Macan, even though the Jag isn't appreciably larger on the outside than the Porsche.

With its back seats folded, the Jag has 69.1 cubic feet of capacity for whatever you need to carry versus a less practical 52 cubic feet in the Macan. The lowered -- almost "chopped" -- roofline of the Porsche also results in less headroom in both rows than in the Jag, even with its standard panorama sunroof.

The only hair in the soup is the Jag's pretty but clumsy curved glass LCD touchscreen interface.

These systems all have the same problem that arises when trying to tap/swipe a smartphone while you're driving. The car moves along with the road -- and so does your finger. You tap or swap something you didn't intend? Try again. This requires some concentration, which takes yours off the road.

The F-Pace does thankfully have end-run mechanical inputs such as finger-wheel volume adjusters on the center console and steering wheel that make such operations less frustrating and distracting.

You may need a crossover. But if you want a Jaguar, this one fills both bills.

Eric's latest book, "Doomed: Good Cars Gone Wrong!" will be available soon. To find out more about Eric and read his past columns, please visit the Creators Syndicate webpage at www.creators.com.

Jaguar -- the luxury brand known for its cars -- currently makes only two kinds of them. And only one of them is a sedan.

The rest are crossovers, which everyone else is known for making.

It makes one wonder why Jaguar ...Read More

Small, economical cars may soon be in vogue again -- for the same reasons they used to be in vogue: Money's tight, and things cost more.

Thus, buying a car that doesn't use, or cost, much has appeal, ...Read More

The Nissan Leaf electric vehicle is now the least expensive EV available in the United States -- and the only EV that starts under $30,000. Everything else that's electrified has a base price well over $30,000.