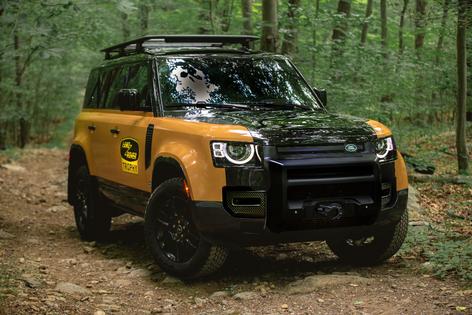 The iconic Land Rover Defender -- the one most people know from safari shows -- had an aluminum body, didn't have carpets -- or air bags -- but did have a 182 horsepower V8 under its hood that averaged about 13 miles-per-gallon.

It was last available new back in '97.

A new Defender arrived in 2020 -- and this time, it came standard with carpets.

Plus a few other things.

The Defender is a medium-small (depending on configuration) SUV known -- back in the day -- for being one of the most off-road capable SUVs ever made.

The original model, which was sold without major updates for decades, was marginally capable on-road, due to its spartan/uncarpeted interior, underpowered and gas-hungry ancient (even then) V8 engine and a rugged but primitive suspension system that was great for tracking lions in the African bush but alarmingly unsteady on American highways.

The new Defender attempts to retain the off-roading capability with the luxury -- and on-road stability -- most SUV buyers expect today.

And now it's available with a supercharged V8 that makes 518 horsepower.

The just-redesigned Nissan Frontier pick-up not only still comes with a V6 -- it's standard. Some of the others in this class - such as the Chevy Colorado -- come standard with a four. One of the...Read More

The Nissan Rogue is one of the best-selling compact crossovers on the market. It's also sold -- for less -- by Mitsubishi.

The Outlander, which shares a platform and mechanicals with the Rogue, seats seven in ...Read More

A Jaguar crossover SUV is a strange cat. What's next? KISS releasing a country record?

But then, no one wants to see Gene Simmons in a cowboy hat singing about his pick-up truck. On the other hand, crossovers are the in-...Read More

You often hear that new cars, especially new crossovers, are so similar they (the car companies) might as well get together and just sell one.

The complaint has some merit. It is hard to tell one crossover from another ...Read More